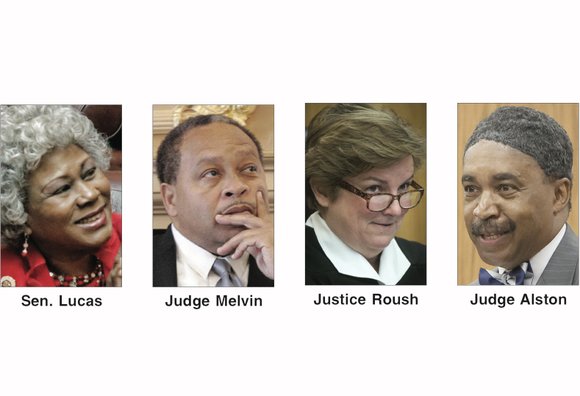 Judge Rossie D. Alston Jr. is still one Senate vote short of winning a General Assembly election that would move him from the Virginia Court of Appeals to the state Supreme Court.

On Tuesday, he came close to winning that crucial vote when Portsmouth Sen. L. Louise Lucas, a Democrat, briefly agreed to break with her party and vote with 20 Republicans to elect him to the state’s highest court.

In exchange, Republicans agreed to elect her friend and mentor, Portsmouth Circuit Court Judge Kenneth R. Melvin, to fill the judicial seat that Judge Alston now holds. The move would have ensured at least one African-American jurist on the 11-member intermediate appeals court. In addition, Sen. Lucas would have been able to choose Judge Melvin’s successor on the Portsmouth Circuit Court.

But the deal fell apart after Sen. Lucas met with Gov. Terry McAuliffe, who worked his persuasive magic. And she also talked with Judge Melvin, a former Democratic member of the House of Delegates and the Virginia Legislative Black Caucus.

In a statement issued later through the Senate Democratic Caucus, Sen. Lucas explained her decision to back off the deal: “I have spoken with Judge Melvin, and he said he is ‘perfectly satisfied’ as a circuit court judge in the City of Portsmouth.”

As a result, Sen. Lucas stated that she would stand with her fellow Democrats and the governor to keep Judge Alston, who is rated highly qualified, off the high court.

This is the latest twist in the partisan drama over filling a vacancy. Last summer, Gov. McAuliffe named Prince William Circuit Court Judge Jane Marum Roush, also rated highly qualified, to the Supreme Court, upsetting Republicans who felt left out because the governor didn’t confer with them beforehand. The governor then reappointed her after the GOP’s first effort to replace Justice Roush with Judge Alston failed to succeed in August.

However, because of the GOP opposition, Justice Roush has been unable to win permanent election to a 12-year term on the Supreme Court. This Saturday, she will have to vacate the seat because she has not been elected. She could be back if the legislature adjourns without being able to fill the seat, giving the governor another opportunity to again name her to the post.

Justice Roush is the first gubernatorial appointee to the state Supreme Court who failed to win legislative election since 1901.

New Richmond Sen. Glen H. Sturtevant Jr., a Republican, has sided with Democrats and declined to elect Judge Alston to replace Justice Roush. Like his predecessor, Sen. Sturtevant opposes removing the governor’s appointee. Thus, the Senate remains deadlocked 20-20, and this is one tie that Democratic Lt. Gov. Ralph Northam is not permitted to break. Only elected senators can vote on judges.

Sen. Lucas would have ended the logjam, providing a 21st vote for Judge Alston’s election. After voting with the Republicans in committee to elect Judge Alston, Sen. Lucas told reporters that her decision to back him grew out of frustration that her legislative proposals were going nowhere, including a bill to allow a casino in Portsmouth.

As a result, she said that when Sen. Tommy Norment of James City County, the Republican majority leader, offered her the judge deal, she took it, despite knowing she would face harsh criticism from fellow Democrats.

“I live in Portsmouth, and people are counting on me to do what’s in the best interest of our city,” Sen. Lucas said. “And I believe having Ken Melvin serve on the Court of Appeals would be an extremely good position for us to be in. People will be proud. I’m proud.

“So much of the stuff that I try to do gets killed,” she said. “This is probably going to be the most significant thing that I’ve done since I’ve been here,” though that prospect has now ended.