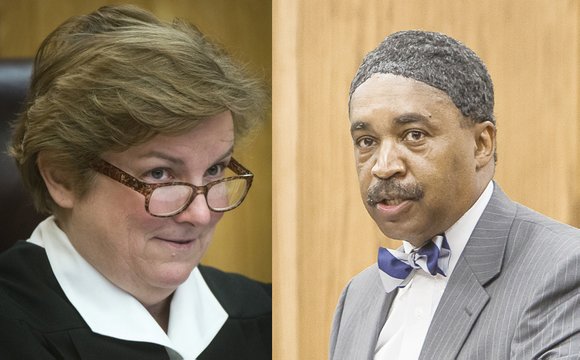 The fate of Virginia Supreme Court Justice Jane Marum Roush is expected to be determined this week, with expectations that she will once again fail to win General Assembly election to remain on the state’s highest court.

In the latest twist in this continuing drama surrounding a judicial appointment, the House of Delegates is to vote Thursday, Jan. 28, on whether Justice Roush is to receive a 12-year appointment on the state Supreme Court or be forced to step down by mid-February.


The Republican speaker made it clear, though, that he expects the winner to be Judge Alston in this partisan fight that has entangled both judges. Republicans hold 66 seats in the 100-member House of Delegates.

“Since last August, the House has maintained that Judge Alston is the most qualified choice for the current vacancy,” Speaker Howell stated in his release. Judge Alston “is a widely respected and experienced Court of Appeals judge who has earned the endorsement of every major bar association in the commonwealth,” he said.

As for Justice Roush, the speaker stated that she disqualified herself by accepting what he deems an illegal temporary appointment in September from the state’s top Democrat, Gov. Terry McAuliffe, that kept her on the court.

Justice Roush, who previously served on the Prince William County Circuit Court, has been caught in the high court appointment drama on and off since last summer.

Initially, she was appointed to fill a vacancy on the high court last summer by Gov. McAuliffe. He was able to fill the seat because the legislature was not in session. However, Speaker Howell, feeling offended because the governor did not consult him before making the appointment, vowed to remove Justice Roush.

She was removed in August when the Republican-controlled General Assembly declined to consider her during a special session. But the seat remained empty when the 40-member Senate tied 20-20 on a largely party line vote seeking to replace her with Judge Alston.

Justice Roush is the first gubernatorial appointee to be rejected for a state Supreme Court seat since 1900.

Even if she were to overcome long odds and surprisingly win the House vote, she would also need to win a majority vote of the Senate.

Currently, there are 21 Republicans and 19 Democrats in the Senate. However, one Republican, new Richmond Sen. Glen H. Sturtevant Jr., already has said he will break ranks and vote with Democrats to support Justice Roush and reject Judge Alston.

His vote would create a 20-20 split in the Senate, with a tie vote meaning her appointment would fail. If the same vote were to happen for Judge Alston, his appointment to the high court also would fail.

The seat on the seven-member Supreme Court would remain vacant if a compromise candidate does not emerge. Justice Roush possibly could return to the court with another appointment by the governor after the legislature adjourns. She could continue to serve until the legislature reconvened.