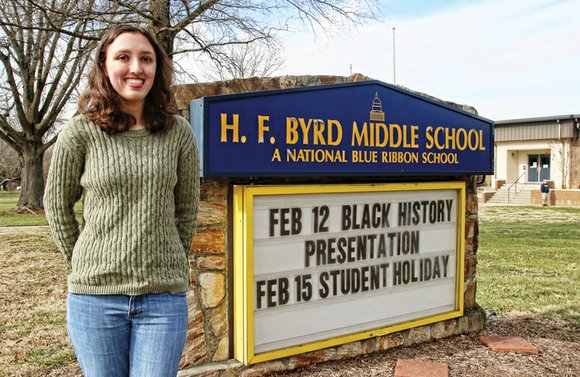 “I learned that a school right down the street from where I live was named after a man who tried to keep schools segregated by shutting them down across the state,” Jordan, a 17-year-old senior, said during an interview Saturday at her Western Henrico County home.

There, she and four adults gathered to discuss with the Free Press their campaign — started by Jordan last fall — to have Henrico Public Schools rename the middle school at 9400 Quioccasin Road to rid it of the racist legacy of Mr. Byrd.

As a U.S. senator, Mr. Byrd was one of the chief architects of “Massive Resistance,” the fiercely backed, state-sanctioned policy to ignore the 1954 landmark U.S. Supreme Court ruling in Brown v. Board of Education ordering the desegregation of public schools because of inequities. Mr. Byrd met with members of the General Assembly to design the strategy to enact laws and policies that led to the closure of many public schools in Virginia between 1958 and 1964 rather than integrate.

Thousands of African-American children were denied a public education during that time, while state money was funneled to all-white private schools to support the education of many white students in places where the schools were closed.

During the next few years, state and federal courts eventually overturned most of the laws that fueled Massive Resistance, but aspects of the campaign against integrated schools in Virginia continued for decades.

“Why would you name a school for somebody who tried to stop some people from being educated?” Jordan recalled thinking.

The more she learned about Mr. Byrd’s efforts to deny public education opportunities to black children, the more she recoiled at the middle school’s name.

“It’s a moral issue to me,” she said. “It’s hard for me to believe that a school would honor someone like him. I think it’s time to change the name,” she said.

As an alternative, she offered the name Oliver Hill Middle School to honor the late trailblazing Richmond civil rights attorney who won numerous legal battles at the height of the Civil Rights Movement. He also was among the lawyers representing plaintiffs in the Davis v. County School Board of Prince Edward County, the Virginia case that was heard with the Brown v. Board of Education case.

“It’s amazing to me,” Jordan added, “that a school would not want to be welcoming to all of its students” by having that name.

Jordan, who lives about a 5-minute drive from Byrd, explained that she was zoned to attend Byrd, but instead attended the International Baccalaureate program at Moody Middle School.