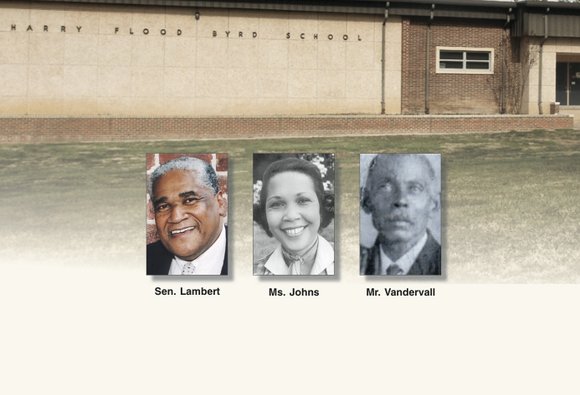 As Henrico schools officials launch the process to rename the former Harry F. Byrd Sr. Middle School, the names of several African-Americans who have notably served the community have emerged as possibilities.

• Vandervall Middle School, for the African-American family that once owned the land where the middle school sits, along with the adjacent land were Pemberton Elementary is located.

In the 1950s during school segregation, Pemberton originally was built for African-American students and named for the late William LeRoy Vandervall, a retired civic leader. It was closed in 1968 when Henrico schools were integrated, but reopened later as Pemberton Elementary.

• Benjamin J. Lambert III, for the late state senator and optometrist who served in the General Assembly for nearly 30 years. He grew up in nearby Ziontown in Henrico County and was a chief proponent of education, serving on the Senate Education and Health Committee, the Virginia Union University Board of Trustees and the board of Sallie Mae.

• Warner M. Jones Sr., for the late educator who served in Henrico for 40 years as a teacher and principal, including four years as principal at the former Virginia Randolph School in Henrico.

• Barbara R. Johns, for the heroic 16-year-old who led the student walk-out in the early 1950s to protest decrepit conditions at the segregated Moton School in Prince Edward County. The resulting lawsuit was consolidated into the historic Brown v. Board of Education case decided by the U.S. Supreme Court in 1954 that struck down separate and unequal public schools.

The Rev. Roscoe Cooper III, the lone African-American on the five-member Henrico School Board that will eventually select the new school name, told the Free Press Wednesday, “I would certainly hope that the community would actively and strongly consider naming the school after an African-American leader and role model.

“Because of the sordid history here and throughout the Commonwealth, there is a dearth of schools and other places where the contributions and leadership of African-Americans has been publicly acknowledged and recognized,” he said.

Other suggestions include naming the school for the late singer-songwriter Tommy Edwards of Henrico County. A historical state marker near the middle school notes that many of the songs Mr. Edwards composed in the 1950s and 1960s were recorded by well-known performers of the era. He also recorded several hits, including “It’s All in the Game” in 1951.

She said she was shocked to learn of Mr. Byrd’s hate-filled actions as one of the chief architects of “Massive Resistance” to skirt the U.S. Supreme Court’s ruling in the Brown case.