Henrico School Board to set hearing on Byrd name change 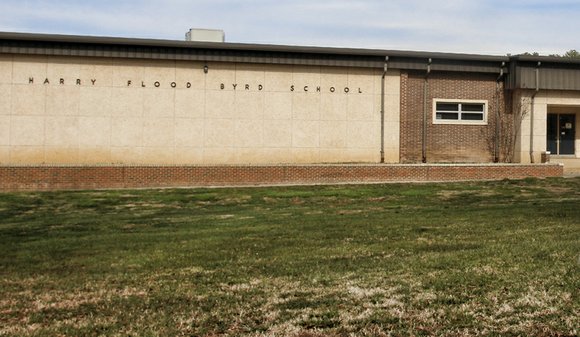 Leaders of a growing campaign to rename Harry F. Byrd Middle School in Henrico County are asking the Henrico School Board to ensure that the county’s growing African- American population is provided an equal voice in the community discussion on the issue.

“We think it’s important that the board doesn’t just look at this as a neighborhood issue, but as a Henrico issue,” Robert Voorhis, one of those spearheading the campaign, told the Free Press this week.

With African-Americans making up more than 30 percent of the county’s population, “we think it’s important that the board solicits input from the black community, as well,” he said, noting that everyone in the county pays taxes to support its schools.

Hermitage High School senior Jordan Chapman began organizing the effort last fall to change the school name that honors the late Mr. Byrd. The former Virginia governor and U.S. senator was one of the chief architects of “Massive Resistance,” a state-sanctioned policy that shut down public schools in many Virginia localities rather than adhere to the U.S. Supreme Court’s 1954 ruling ordering public schools to be desegregated to end educational inequities.

were denied a public education as a result, while state money was provided to all-white private schools in many places where public schools were closed.

“Since the board has made it clear that they want to hear from all sides of the is- sue,” Jordan said, “we’d like to stress the fact that the voices of the racial minorities whose voices were disregarded at the time of the school’s original naming should not once again be ignored.”

The board also disclosed at its Feb. 11 meeting that it would cost about $138,000 to change the Byrd name.

School Board Chairwoman Michelle F. “Micky” Ogburn told the Free Press on Tues- day that the board would set the location for a public hearing on the Byrd name change at its next work session Thursday, Feb. 25.

Meanwhile, the Free Press continued to seek comment on the name change issue from the Rev. Roscoe Cooper III, the School Board’s lone African-American member, who represents the Fairfield District. He did not reply to several queries.

He told the Free Press last week he would not disclose his stance publicly until he had the opportunity to discuss it with board colleagues.