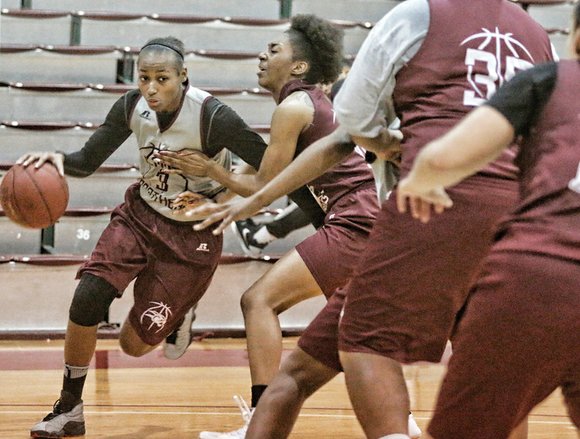 Powerhouse and record-breaker Kiana Johnson drives to the basket during a practice game at Virginia Union University. Photo by Sandra Sellars

Johnson scored 45 points against the Lincoln Lions to surpass the single-game record of 44 points set by Marquietta Randolph in a 1995 game against Winston-Salem State University.

In achieving history, Johnson made 14 field goals, including three three-pointers, and was 14 for 14 at the foul line. She also had eight assists.

Also against Lincoln, Johnson passed Randolph for the most single-season points with 622. Randolph’s single-season record of 587 points also was set in 1995.

Johnson, who transferred this season from Michigan State University, leads the CIAA with an average of 28.3 points per game.

Next in line is another VUU player, Lady Walker, averaging 18.0 points. Walker leads the CIAA in rebounding with a 13.2 average.

Under first-year Coach AnnMarie Gilbert, the Panthers began this week 20-2 overall and 12-2 in the CIAA.