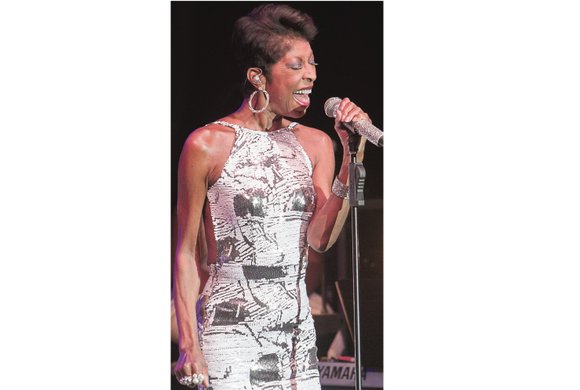 Natalie Cole performing at the 2015 Richmond Jazz Festival at Maymont.

Grammy Award-winning singer Natalie Cole, whose biggest hit came in a virtual duet with her late father, the legendary Nat King Cole, of his decades-old hit “Unforgettable,” has died.

“Natalie fought a fierce, courageous battle, dying how she lived — with dignity, strength and honor. Our beloved mother and sister will be greatly missed and remain unforgettable in our hearts forever,” said a statement signed by Ms. Cole’s only child, Robert Yancey, and her sisters, twins Timolin and Casey Cole.

Tributes quickly poured in from admirers and entertainers alike.

Ms. Cole broke out in 1975 with the hit “This Will Be,” which won the Grammy for best R&B female performance and also earned her the Grammy for best new artist. Critics compared her to Diana Ross and Aretha Franklin. But her career floundered in the 1980s because of her heroin addiction.

She bounced back, and her career reached the superstar level in 1991, when she recorded “Unforgettable ... With Love.” The album contained songs associated with her father, the silky-voiced baritone who was one of the most popular performers of the 1940s and ’50s but died before his daughter began her solo career.

Using technology that was cutting edge at the time, studio engineers merged her voice with her father’s in the song “Unforgettable,” which had been a hit for Mr. Cole in 1951. The result was a moving, sentimental No. 1 hit 40 years later that actually sounded as if the two were singing a duet.

“I thank my dad for leaving me such a wonderful, wonderful heritage,” Ms. Cole said in accepting her awards.

Ms. Cole was 11 when she first sang professionally, with her father. But she went to the University of Massachusetts in Amherst with no plans of an entertainment career. While in college, she performed with bands and set aside plans for being a child psychologist.

Her mother, Maria Cole, also had been a singer with the Duke Ellington and Count Basie bands.

The success of “Unforgettable” capped her comeback after a dark period of heroin, crack and alcohol abuse. In her 2000 memoir, “Angel on My Shoulder,” Ms. Cole said she turned to drugs because of unresolved issues in her life, including being molested as a child and her father’s death when she was 15. She was married three times.

She portrayed herself in “Livin’ for Love: The Natalie Cole Story,” a 2000 television movie that depicted her drug addiction. She spent six months in a rehabilitation program at the Hazelden Clinic in Minnesota and told CBS in 2006 that “those people gave me my life back one day at a time.”

Ms. Cole was diagnosed with hepatitis in 2008 from sharing needles with drug addicts, and underwent kidney transplant surgery in 2009. This past autumn, she canceled several concerts scheduled for November and December, citing a recent medical procedure.

Her 2008 album of pop standards, “Still Unforgettable,” included another duet with her father, “Walkin’ My Baby Back Home.” Her most recent work was 2013’s “Natalie Cole en Espanol.”

Her other hits included “Everlasting,” “Sophisticated Lady,” “I’ve Got Love on My Mind,” and “Good to Be Back.” In all, she won nine Grammys.