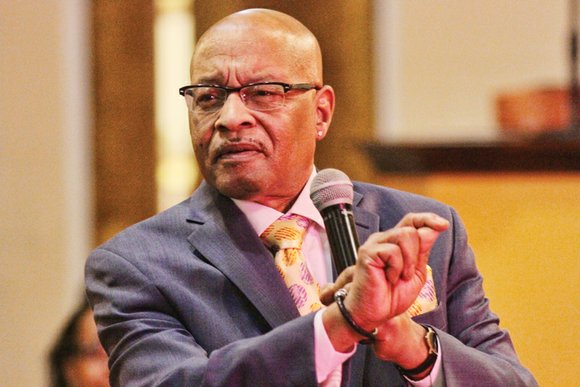 The Rev. Leonidas B. Young II speaks to his congregation at New Kingdom Christian Ministries on North Side in December 2014. Photo by Sandra Sellars

The Rev. Leonidas B. Young II rose from the pulpit of historic Fourth Baptist Church in the East End to the pinnacle of Richmond political power, serving as the city’s mayor from 1994 to 1996.

Elected to Richmond City Council representing the East End’s 7th District from 1992 to 1999, he was considered a rising political star by many at the time.

However, any aspirations he might have had for higher office evaporated when he was convicted of federal public corruption charges in February 1999.

Under suspicion for several years, he pleaded guilty to accepting money while mayor to promote the sale of city cemeteries to a private company, evading taxes by failing to report about $7,000 of illegal income on his federal taxes and obstructing justice by urging an ally to lie to authorities about the corruption. He also admitted to embezzling inheritance money from an elderly couple in his church to help pay for extramarital affairs.

The day his trial was to begin, he pleaded guilty. Earlier that same morning, he resigned from City Council and his church soon booted him out as pastor.

He served about 18 months in a federal prison in South Carolina.

After his release, he returned to his Richmond roots to found and pastor New Kingdom Christian Ministries, where his ministry aimed to lift others who, like him, had lost their way.

On his redemptive path, Rev. Young had his rights restored in 2012 by then-Gov. Bob McDonnell. He then cast his hat in the political ring one final time last June in an unsuccessful bid for the Democratic nomination to represent Richmond in the House of Delegates.

Rev. Young, a powerful and inspiring orator, is being remembered by the community for his years of pastoral and public service, his precipitous fall from grace and his resurrection as a faith leader following his death at a Richmond hospital Saturday, Jan. 16, 2016.

He was surrounded by loved ones when he succumbed to cancer at age 62. He had been diagnosed with the disease in December.

Family, friends and others will memorialize his life at his funeral at noon Tuesday, Jan. 26, at Fifth Baptist Church, 1415 W. Cary St., where he was baptized and ordained.

Shocked by the news of his death, about 150 congregation members gathered Sunday at New Kingdom to honor Rev. Young’s memory.

The Rev. Chris Moore, an assistant pastor at the church, told the worshippers, “We know God is good” and that should remain the foremost thought as members “weep and mourn.”

Jerome Barley, a church elder, echoed Rev. Young’s message of forgiveness. “He made mistakes and God lifted him up and he grew from there,” he said.

Mary Manning, a church member, vowed that even in grief, “the church will carry on” Rev. Young’s mission and honor his memory.

In a Facebook post, Richmond gospel singer Cora Armstrong stated, “Lee was a very powerful, passionate, loving man of God. He believed in second chances and not casting judgment on others.