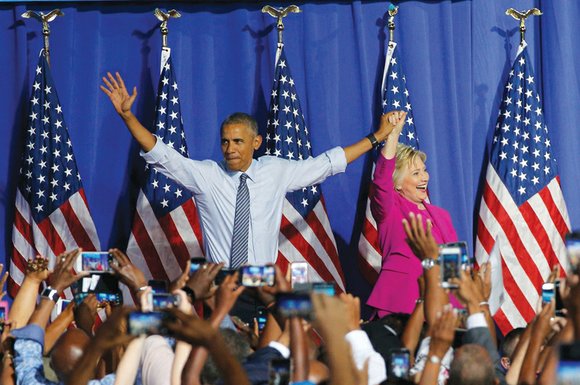 President Barack Obama waves with Hillary Clinton, the presumptive Democratic presidential nominee, at a campaign event Tuesday in Charlotte, N.C. Neither the president or Mrs. Clinton were told ahead of time about the FBI announcement or conclusion. Photo by Reuters Bryan Snyder

The FBI recommended Tuesday that no criminal charges be filed over Hillary Clinton’s use of private email servers while she was secretary of state, but rebuked the Democratic U.S. presidential candidate for “extremely careless” handling of classified information.

While FBI Director James B. Comey’s announcement lifted a cloud of uncertainty that had loomed over Mrs. Clinton’s White House campaign, his strong criticism of her judgment ignited a new attack on her over the email issue by Donald Trump, her likely Republican opponent in the Nov. 8 election.

Mr. Comey’s comments could reinforce what polls show are widespread public concerns about Mrs. Clinton’s honesty and trustworthiness. Republicans have pointed to the controversy as evidence that she considered herself above the law.

Speaker Ryan called on the FBI to release all of its findings in the case and said Mr. Comey would be called to testify before the House Oversight Committee.

Mr. Comey was appointed FBI director in 2013 by President Obama. He previously served as an assistant U.S. attorney for the Southern District of New York and was the lead federal prosecutor in Richmond from 1996 to 2001. In a lengthy statement on the FBI’s conclusions from its yearlong investigation, Mr. Comey directly contradicted statements Mrs. Clinton has made while defending her use of the private email setup.

But he said the FBI concluded “no reasonable prosecutor” would bring charges.

“Although the Department of Justice makes final decisions on matters like this, we are expressing to justice our view that no charges are appropriate in this case,” Mr. Comey told reporters in Washington.

His recommendation will likely stand. The country’s top prosecutor, U.S. Attorney General Loretta Lynch, said Wednesday that she accepted the recommendation of the FBI director and would not charge Mrs. Clinton for mishandling emails.

Mrs. Clinton’s campaign was anxious to move on after Mr. Comey’s announcement, saying in a statement it was pleased with the FBI recommendations.

“As the secretary has long said, it was a mistake to use her personal email, and she would not do it again. We are glad that this matter is now resolved,” spokesman Brian Fallon said.

He did not respond to questions about Mr. Comey’s rebuttal of the main arguments Mrs. Clinton has offered in defense of her use of private email.

At a rally in Raleigh, N.C., on Tuesday night, Mr. Trump, the presumptive Republican nominee, said the controversy should disqualify Mrs. Clinton from being president and that her email system may well have been hacked by U.S. enemies.

“Our enemies may have a blackmail file on crooked Hillary and this alone means that she should not be allowed to serve as president of the United States,” Mr. Trump said. “We now know that she lied to the country when she said that she did not send classified information on her server. She lied!”

The FBI director’s announcement came hours before Mrs. Clinton’s first campaign appearance with President Obama in Charlotte, N.C., where neither President Obama nor Mrs. Clinton mentioned the email probe. It also came less than three weeks before the Democratic National Convention July 25 through 28 in Philadelphia at which Mrs. Clinton is to be nominated as the party’s candidate for the November election.

After months on the sidelines, President Obama told voters he was ready to “pass the baton” to his former secretary of state.

The president took the microphone in Charlotte, chanting “Hillary!” and told the crowd there had never been a candidate as prepared to be president as Mrs. Clinton, his rival in 2008 for the Democratic nomination.

“I’ve run my last campaign, and I couldn’t be prouder of the things we’ve done together, but I’m ready to pass the baton,” he said in what was likely to be the first of many trips this year on Mrs. Clinton’s behalf.

“I know Hillary Clinton is going to take it, and I know she can run that race,” he said.

President Obama was returning the favor after Mrs. Clinton backed him in 2008’s general election. This year, he waited while she battled U.S. Sen. Bernie Sanders of Vermont for the Democratic nomination before endorsing Mrs. Clinton last month once she became the party’s presumptive nominee.

In Charlotte, Mrs. Clinton preceded President Obama, saying, “We’re going to build on the vision for America that President Obama has always championed, a vision for a future where we do great things together.”