Serena upset in fourth round of Miami Open 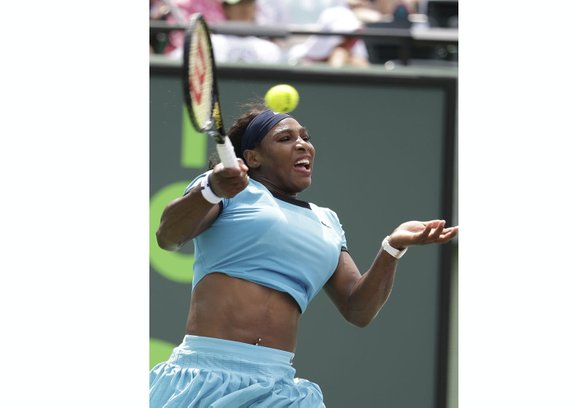 Serena Williams hits a hard return in her losing effort against Svetlana Kuznetsova at Miami Open Monday. “I can’t win every match,” Serena said after the World No. 1 bowed to the long-shot No. 15 seed. Lynne Sladsky/Associated Press

Serena Williams had been out of the tournament for less than 20 minutes when she climbed into her white Mini Cooper with the checkerboard top and pulled away from the players’ parking lot, fastening her seat belt as she drove.

A hasty departure, for sure.

Williams’ 20-match winning streak at Key Biscayne ended Monday with a 6-7 (3), 6-1, 6-2 loss to Svetlana Kuznetsova in the fourth round of the upset-filled Miami Open.

Williams was bidding for her ninth title in the event and her fourth in a row. But after a grueling first set that lasted nearly an hour, the 21-time Grand Slam champion faded on a sweltering afternoon.

It was her earliest exit at Key Biscayne since 2000, when she lost in the fourth round to Jennifer Capriati.

“I did the best I could,” she said during a post-match news conference that lasted less than three minutes before she cut it off. “I can’t win every match. These players come out and play me like they’ve never played before in their lives. I have to be 300 percent every day.”

Williams, 34, will retain the No. 1 ranking, but she hasn’t won a tournament since earning her 69th title at Cincinnati in August.

“She’s still No. 1, and she still plays great,” Kuznetsova said. “I don’t see much to be depressed about.”

Murray played in the late afternoon and declined to blame the heat, but he committed 22 unforced errors in the final set and 55 total. He was broken six times, including in his final three service games.

“I made many more mistakes than usual, especially in the third set,” said Murray, a two-time Key Biscayne champion. “He was more solid than me.”

Murray’s elimination leaves the tournament without four of the five top-seeded men. Among them only No. 1 Novak Djokovic reached the round of 16.

The No. 15-seeded Kuznetsova beat Williams with defense, repeatedly extending points until she forced a mistake. The Russian finished with only 18 unforced errors to 55 for Williams.

In addition, Williams’ serve was uncharacteristically unreliable. She hit 13 aces but also had nine double faults and was broken six times.

Williams said the 91-degree temperature — a record for the date — didn’t faze her.

“Physically I’m fine,” she said. “I don’t know, I guess I didn’t move today. Maybe that was one of the things that didn’t work out for me.”

Kuznetsova, 30, won Key Biscayne 10 years ago and is into the quarterfinals for the first time since 2009.

“I’m too old,” she told the crowd. “I’ve been many times on this court. I love being back here, and I’m really happy with my performance.”