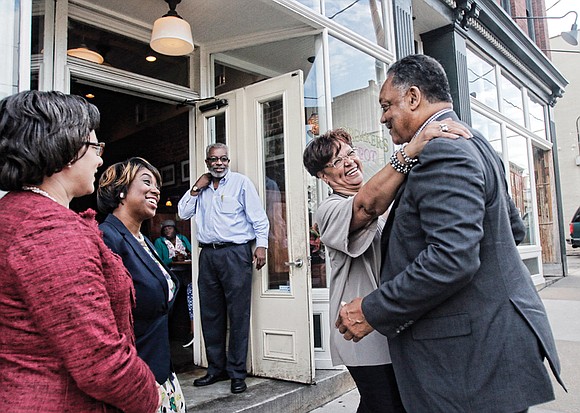 Millennials don’t understand the privilege of voting because they weren’t alive during the struggle of the 1950s and 1960s to secure the right to vote, according to the Rev. Jesse L. Jackson Sr.

“Those who inherit the struggles of others, who are now beneficiaries of that struggle — privileged ones — don’t have the right to dismiss the struggle that made that choice possible,” the civil rights leader said in an exclusive interview Tuesday with the Richmond Free Press. “They assume that no matter who is president, they’ll be alright.”

He was talking about millennials, young people in their early 30s and younger who the Clinton campaign fears may sit out the November election or turn to third party candidates since Mrs. Clinton’s victory over U.S. Sen. Bernie Sanders for the Democratic nomination.

Rev. Jackson said young people seeking justice, such as those in the Black Lives Matter movement, must continue to push and advocate for justice in their lives.

Voting, he said, is critical to that fight.

“The moral universe in America is not inclined toward justice. You have to bend it,” said Rev. Jackson, who turns 75 on Saturday. “Vote to bend it, act to bend it, selectively use your dollar to bend it.”

“To abstain from voting,” he continued, “is to join those who have denied you the right to vote.”

Rev. Jackson, who sought the Democratic nomination for president in the 1984 and 1988, said voters considering sitting out the election, or possibly casting a vote for third party candidates Gary Johnson or Jill Stein, would commit an affront to the freedom fighters of the past.

“How can you dishonor the tradition of those who fought from slavery to freedom? How do you dishonor our struggle for the protective right to vote?” he questioned.

“There is lineage of struggle we should honor,” he continued. “Nothing that we want or need comes from cynically not voting — and not voting for the best candidate.”

Rev. Jackson’s local efforts on behalf of Mrs. Clinton began Tuesday at a voter registration drive at Virginia Commonwealth University. He went on to greet a dozen or so campaign workers at Mrs. Clinton’s campaign headquarters in Scott’s Addition before talking with a Free Press reporter.

Rev. Jackson accused Trump supporters and the media, alike, of creating a false image of Mrs. Clinton in hopes that voters will “vote for anyone except Hillary.”

“They are creating a caricature of her supposed untrustworthiness, the same way they did Dr. Martin Luther King,” he continued. “It’s a diversion.”

Rev. Jackson, who was with Dr. King during his 1968 assassination on the balcony of the Lorraine Motel in Memphis, Tenn., outlined about a dozen issues in which he said Mrs. Clinton stands head and shoulders above Mr. Trump.

From Richmond, Rev. Jackson headed to Longwood University in Farmville, where he was a guest of Mrs. Clinton’s running mate, U.S. Sen. Tim Kaine of Virginia, during Tuesday evening’s vice presidential debate.

Other guests of Sen. Kaine in the Longwood University audience included Dr. Okianer Christian Dark, associate provost at Howard University, who was denied an apartment based on her race while a law professor at the University of Richmond. Sen. Kaine, in his law practice, took her case when she pursued legal action.

Also among the guests were former state Sen. Henry L. Marsh III, the first African-American mayor of Richmond, and Lily Habtu, a gun safety advocate and survivor of the Virginia Tech massacre in 2007. 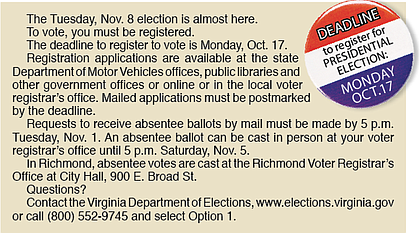