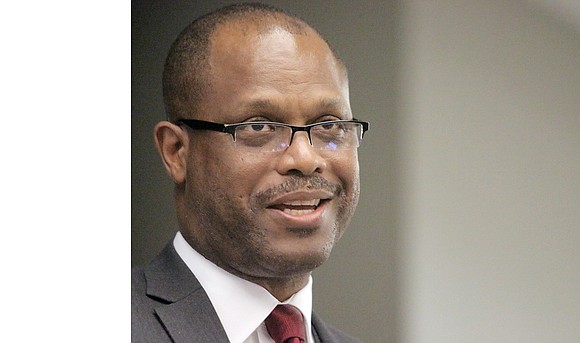 More than three years later, improvement is beginning to show, he said in a recent Richmond Free Press interview. And while each year brings a recruitment season and he has been given invitations to consider offers in other cities, the 50-year-old said he is staying put in Richmond.

“I am sitting here trying to do the job to make the district better,” Dr. Bedden said. “With the compact between City Council, the mayor and the School Board, we have a great opportunity to improve things. It’s an exciting time for RPS.”

The compact he is referring to is an organized collaboration between Mayor Levar M. Stoney and the two important public bodies overseeing the city and the school system that serves 24,000 students to establish goals and steps to achieve them.

For example, to reduce family poverty rates and build community wealth as the compact outlines, the three entities will join forces to improve workforce development and job creation, and actively engage in neighborhood revitalization to create mixed-income neighborhoods.

The first quarterly meeting of the compact members is May 1.

The compact, Dr. Bedden said, is an example of progress.

Further evidence of progress — and confirmation of the School Board’s endorsement of Dr. Bedden and his plans for improving the school district — is the board’s decision in December 2015 to extend his contract through June 30, 2019. The original contract was to expire June 30, 2017.

Nonetheless, Dr. Bedden has faced his fair share of critics.

Jonathan Young, who represents the 4th District on the School Board, admits to being one of them during his campaign last fall for the seat. At the time, he publicly stated he wanted Dr. Bedden to be replaced.

But those sentiments have softened since taking office in January. Mr. Young echoes the sentiment of his fellow School Board members when he says he wants Dr. Bedden to succeed. But his support of Dr. Bedden comes with a few conditions.

“As long as he is willing and prepared to adopt a new kind of approach that empowers teachers and principals, I am behind him,” Mr. Young told the Free Press. “I cannot support continuation of the status quo, but I can support empowering principals and teachers, taking some risks and doing some unorthodox and unconventional things.”

Mr. Young strongly advocates the school system follow a lean business model of low overhead and minimal bureaucracy. He said he wants “to create a culture where we establish and practice trust, empowering teachers and principals to make decisions about their classrooms and schools.”

Any kind of change, Dr. Bedden said, will take time, and the unique challenges facing RPS slow the transition.

The school system spends more money per student than peer districts, but has a disproportionately high-need student population. It has a high share of students who are economically disadvantaged and who have disabilities. More than three out of four students qualify for free or reduced lunch, 40 percent live below the poverty line and 18 percent of students have special needs.