Is statue removal off the table? 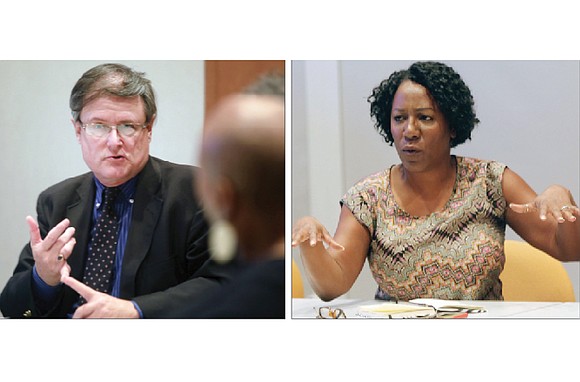 Gregg D. Kimball, director of education and outreach at the Library of Virginia, and Christy Coleman, CEO of the American Civil War Museum, are co-chairs of the Monument Avenue Commission.

Can the Monument Avenue Commission recommend that the statues of Confederates be removed?

That was the pressing question at the first full meeting Monday of the commission assembled by Richmond Mayor Levar M. Stoney to deal with the statues to vanquished traitors along the tree-lined thoroughfare.

Mayor Stoney, in announcing the commission’s formation on June 22, said he was insulted by the monuments “designed to keep the free African people of Virginia in bondage.” But he said he would not call for the statues to be taken down.

Instead, Mayor Stoney said the statues need to be put “in context,” and charged the commission with figuring that out.

But at Monday’s meeting, which was monitored by about a dozen people from the public, Mamie Taylor, a former member of the Richmond School Board, asked if the commission is willing to recommend removal of the statues if Richmond citizens resoundingly call for it.

“No,” replied Gregg D. Kimball, director of education and outreach for the Library of Virginia and the commission co-chairman. “The commission’s specific charge was interpretive rather than removal. That’s what the mayor asked us for.”

But after the commission was pressed about it by a man in the audience, Christy Coleman, CEO of the American Civil War Museum and the commission’s other co-chair, said, “Nothing precludes us from saying that these (other) very strong sentiments have come forward. I think that’s our responsibility as commissioners.”

Commission member Coleen Butler Rodriguez, a member of the Historic Richmond Board of Advisors, read aloud from a notebook that she said contained the official charge from the mayor:

“The commission will be tasked with soliciting public input and pooling its collective centuries of experience in history, art, government, culture and community to make recommendations to the Mayor’s Office on how to best tell the story of our monuments.”

The statement could not be confirmed by the Free Press.

The room filled with silence.

The man in the audience, who did not identify himself, then responded, “Doesn’t sound like to me it precludes removal. And I’m certain that there are many people who feel like there’s no way to contextualize these things without removal.”

Commission member Julian Hayter, a historian and assistant professor at the University of Richmond, said most people who have posted comments on the commission’s website are not advocating the Confederate statues’ removal or relocation.

“I think it’s abundantly clear from what we’ve seen with some of the comments online that there’s only a small handful of people who have actually asked for removal of the monuments,” Dr. Hayter said.

“I am not a lawyer, but just because (the charge) doesn’t preclude removal doesn’t mean that that’s how this will end up, particularly given what I’ve read online,” he continued. “It just doesn’t seem the majority of people — and our charge is to listen to the public — are calling for the removal of the monuments.”

Officials have said the website comments will be made available soon for public review.

The commission is encouraging the public to voice their opinion about the statues online at www.MonumentAvenueCommission.org/input or at the commission’s public meetings.

The commission held a two-hour forum Wednesday evening during the Free Press publishing deadline. A second forum is scheduled for 6:30 p.m. Wednesday, Sept. 13, at the Virginia Historical Society, 428 N. Boulevard.

Commission members said a third forum may be held on a weekend.

Near the end of Monday’s meeting, Ms. Coleman and Dr. Kimball vowed to consider all community input and to relay the sentiment to Mayor Stoney.

“We will report to the mayor what we’ve heard from everyone,” Dr. Kimball said. “But our main goal is to recommend interpretation, as he has charged us to do. Whatever else decision is made will be made by the Mayor’s Office.”