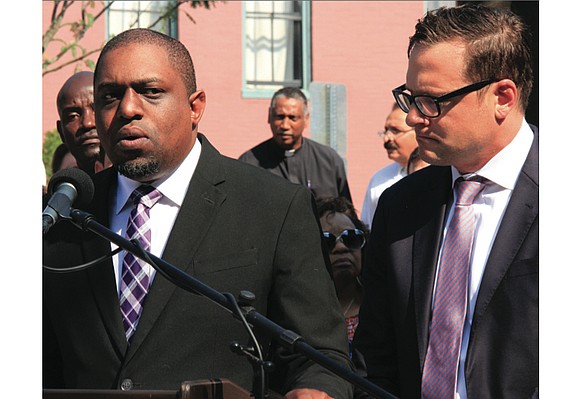 Several hundred Richmond area pastors and ministers came together Monday in an unprecedented display of unity to reject white supremacy and to affirm that every human being is created equally.

At a news conference held at the Maggie L. Walker Plaza at Broad and Adams streets in Downtown, Pastor Corey Widmer of Third Church in Henrico County and David Bailey, executive director of Arrabon, an organization that provides cultural training for churches and organizations, called on churches to combat racism, anti-Semitism and white supremacy through dialogue with their churches and interactions with diverse people.

A unity statement, circulated by the pair on Friday in response to the events in Charlottesville, garnered the signatures of more than 600 Richmond area faith leaders within 72 hours. The statement was presented to the public Monday at the outdoor news conference.

“We want every person in our city, our commonwealth and our nation to know that the church in Richmond is united in rejecting the ideology of white supremacy, including anti-Semitism,” said Pastor Widner. “We recognize the ways the church, especially the white church, has failed to do this in the past, and we humbly repent for the sin.

“We wanted to be unequivocal about what we believe the Bible in the Church of Jesus Christ stands for,” he continued, so the unity statement was penned and signed by ministers from many Christian faiths.

The statement reads in part, “We reject the ideology of white supremacy, including anti-Semitism, as an unqualified evil, a denunciation of the gospel, and a heresay which wars against God’s design for human culture and creation. We reject the notion that white people, or any collection of humans of any culture, are superior to any other …

“We repent because Christians have played a major role in helping create the segregation and racial injustice that we see in our city and nation today. We repent of our own racism, fear, and hatred, both conscious and unconscious …

Mr. Bailey said after the news conference the occasion speaks to the need for unity among people of all races.

“We have a tremendous opportunity in my generation — the first generations of black people to be born with full rights — to be able to not only heal our own community, but to help with the healing of our country and nation,” he said.

The ministers’ message resonated with faith leaders outside Virginia, at least one of whom attended Monday’s event.

“We have to take our communities back,” said Dr. Steve Lewis, dean of the Breakthrough Bible College in Temple Hills, Md. “I know we can stand together as neighbors, which is one of the commandments that Jesus Christ came and gave us — love the one true God then love your neighbor as you love yourself.”

He said people should pray for the white supremacists. “Then they can repent and God will forgive them because, right now, they know not what they do.”

Several pastors said the challenge now facing Richmond and localities around the nation is serious, open and honest conversation among people, without regard to race and religious affiliation.

Tim Holtz of the Richmond Christian Leadership Initiative said conversations he has been a part of stress the importance of people in the white community talking with one another about racism and white supremacy.

“There are things that can only be said by white folks to other white folks,” Mr. Holtz said. “Talk to one another about ways we are practicing our faith.”

Richmond’s history as the former capital of the Confederacy continues to play a significant role in both dividing and unifying communities, others said. It has both served as a major hub for the trans-Atlantic slave trade and the hometown crucial to making L. Douglas Wilder, the grandson of a slave, the nation’s first elected African-American governor.

“We believe this is an unprecedented moment of unity in Richmond’s history,” said Pastor Don Coleman of East End Fellowship and co-founder of Bless RVA. “We hope that this day will be remembered as the day when God brought the church together to lead the way toward Jesus Christ’s perfect standard of equality, justice and love.”