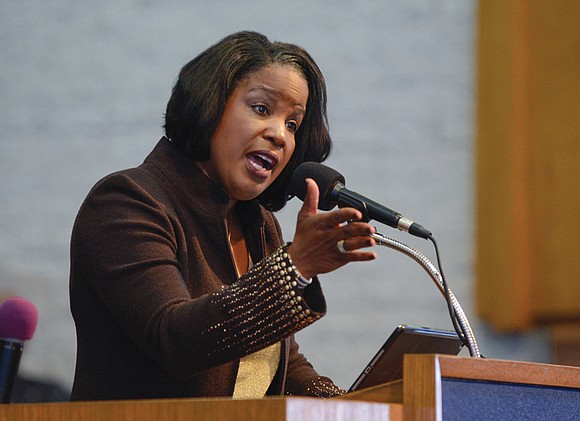 “We pray, we labor and we wait, as we witness turmoil, turnover, chaos and controversy over the past year that has been promulgated from the highest office of the land through a series of irrational and irate daily tweets that systematically seem to try to roll back the clock on civil rights gains in an attempt to take us back to the good old days, or as some may say, to make America great again,” she said.

But during the New Year’s Day event sponsored by the Baptist Ministers’ Conference of Richmond and Vicinity, Ms. Brock encouraged the roughly 300 people in attendance to keep fighting injustice.

The Virginia Union University graduate, who also earned a master’s in divinity from VUU’s Samuel DeWitt Proctor School of Theology, drew parallels between Jesus’ teachings in the Bible to issues confronting the nation today, such as health care and immigration.

“Too many of us are locked in a room with the door wide open. Too many faith leaders and church folks remain silent about what Jesus talked so much about,” Ms. Brock said. “We need you to stand with us when we welcome the stranger, stand with our Muslim brothers and sisters with the travel ban or with Dreamers on immigration reform.”

Monday’s event is a New Year’s Day tradition to celebrate progress and encourage people to continue the fight for freedom, according to the Rev. Emanuel Harris, vice president of the ministers’ conference.

“Our work is great,” Rev. Harris told the crowd. “Injustice still exists. The fight continues. Stay engaged. The same God that liberated back then is liberating today.”

Emphasizing that point, Ms. Brock shared the story of Elmore Nickleberry, a sanitation worker in Memphis for more than 60 years. He was one of the workers who went on strike in 1968 to demand fair wages and safe working conditions when Dr. Martin Luther King Jr. traveled to Memphis to support the workers and was assassinated.

Mr. Nickleberry, now in his 80s, still works a sanitation route, according to published reports, because he never received a promised pension from the city of Memphis.

During the service, the crowd joined hands to pray in a gesture of strength and unity similar to those who linked arms as they marched for civil rights. The Rev. Charles Baugham, interim pastor of St. Mark Baptist Church in Goochland, prayed, “God, we need your presence and your activity as we engage in issues and challenges of our time.”