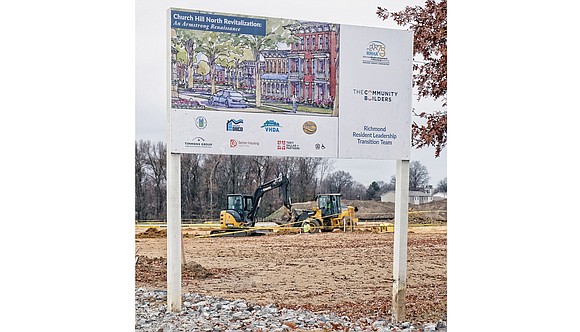 A sign offers the vision of the planned Church Hill North development that now needs a $4.9 million bailout from City Council. Heavy machinery prepares the land in the 1600 block of North 31st Street for the proposed construction of new apartments and homes on the site of the old Armstrong High School.

The project to transform the poverty-stricken Creighton Court public housing area in the East End into a mixed-income development has run into a glitch — the master developer can’t raise all the money needed to construct the first 105 apartments.

Next week, Richmond City Council is poised to ride to the rescue of The Community Builders of Boston, a nonprofit, and the Richmond Redevelopment and Housing Authority, which is overseeing the work on the project dubbed Church Hill North.

At its meeting Monday, Dec. 11, City Council is expected to approve a $4.9 million bailout the city administration is requesting to keep the first phases of the redevelopment program on track.

There’s a problem, according to 5th District Councilman Parker C. Agelasto. The bailout will flout a new council policy requiring the city administration to show a return on the city’s investment — a real problem for a project the administration acknowledges is unlikely to generate enough new tax revenue to repay the new subsidy or money the city poured earlier into the project that was started by former Mayor Dwight C. Jones.

The policy Mr. Agelasto cited sought to end the practice of investing taxpayer dollars into projects that did not generate sufficient income for the city to justify the financial support.

Richmond already has moved far down the road in planning for this project, probably too far for most of the council members to consider pulling back.

According to Lee Downey, the city’s chief development officer, the city invested $8 million to clear away the former Armstrong High School building at 1611 N. 31st St. and to cover the cost of site work, including preparing the ground, building streets and alleys and installing new utility lines.

Redeveloping the 22-acre Armstrong site represents the first step toward the real goal — replacing the public housing units in Creighton Court with new residences, although the city is still trying to find the money to take on that larger effort.

Mr. Agelasto, however, believes that the administration is obligated to deliver a statement on the projected return on investment with its request for council approval of the subsidy. He expressed dismay that such a statement has not been provided.

He said that information is needed to provide the council with a clearer picture of the full cost and to enable council members to consider whether it is worth the price.

He made the point last week as the council’s Finance and Economic Development Committee reviewed the proposal that calls for the city to borrow from a pot of federal money and repay the debt over 20 years, primarily with revenue obtained from selling tax-delinquent properties.