Wrestling with the past 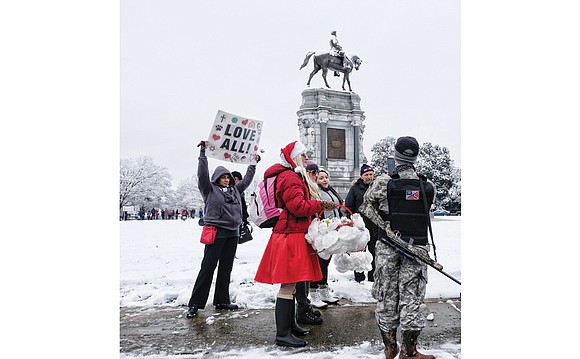 A small band of armed neo-Confederates protesting the possible removal of Confederate statues on Richmond’s Monument Avenue were met last Saturday by a vocal group of counterprotesters rankled by the amount of money the Confederate rallies are costing the city.

The four-hour protest, the second in the city since mid-September by the Tennessee-based CSA II: The New Confederate States of America, was muted in part by chilly temperatures and snowy conditions Saturday and the low-key efforts by Richmond Police beforehand to deal with the rally without drawing wider public attention and potentially more protesters.

Police largely kept the 15 neo-Confederates and the 30 or so counterprotesters separated as they walked around the state-owned statue of Confederate Gen. Robert E. Lee. Many of the Confederate supporters were dressed in camouflage clothing. Several had assault weapons and other rifles slung over their shoulders.

The initial rally on Sept. 16, which drew a handful of CSA II members and several hundred counterprotesters, cost the city more than a half a million dollars, mostly for police overtime and equipment. Richmond Police declined to release information about the number of officers at Saturday’s rally. Even though police presence was visibly reduced compared to the first rally, the expense became a point of contention on Saturday as counterprotesters loudly addressed and taunted the neo-Confederates.

“That $570,000 could’ve gone to our schools, to fix our public transportation, to fix our roads,” Joseph Rogers said over a speaker system. “But, instead, it was wasted on your rally and protecting these statues,” he said as counterprotesters unfurled a gigantic receipt representing the debt it said CSA II owes to the City of Richmond.

“Here is your bill. We take cash,” Mr. Rogers continued. “But if you really want to, you can start a GoFundMe and raise it for yourself,” he said, alluding to the crowdfunding account CSA II members launched when their tires were flattened and they were stranded in Richmond after their last rally.

Thomas E. Crompton, who calls himself the “commanding general” of CSA II, insisted that the Civil War was not about slavery and that the monuments don’t honor anything negative.

Several others with the “Protect All the Monuments on Monument Avenue Rally” said they want to stop the “myths” surrounding the Confederacy and that the statues should remain for their educational value.

A few repeatedly insisted that if Richmond’s monuments come down, as they have in other cities, an unspecified portion of history “will repeat itself.”

Gene Stilp, an activist from Pennsylvania, stood with counterprotesters opposed to maintaining the Confederate symbols.

“When they say, ‘Heritage not hate,’ the history of the Confederate flag is hate,” he said.

Mr. Stilp asked volunteers to help him rip into pieces a flag that showed the Confederate battle flag on one side and the Nazi flag with a Swastika on the other. He has traveled to several states burning similar banners outside of courthouses and NASCAR events. He said Saturday that combining the two flags encourages people to think about the ideologies they represent.

“The only way people learn about an image is by thinking about it,” he said. “Both flags stand for the misguided value systems of hate, racism, white supremacy, bigotry, slavery, intimidation, intolerance and death.”

In addition to concerns about rally costs, some counterprotesters took the opportunity to advocate for removing the statues from Monument Avenue.

“In 2006, the state government spent $450,000 to try to clean this statue,” Richmond activist Phil Wilayto said of the Lee monument. “This statue will never be clean. It has the blood of hundreds of thousands of soldiers who died defending the system of chattel slavery.”

Mr. Wilayto faulted state leadership for the violence and death at the August “Unite the Right” rally of neo-Nazis and white nationalists in Charlottesville and said the Confederate statues attract undesirable characters and must come down.

Saturday’s event ended without any arrests.

Following the rally, the CSA II posted a picture of the frosty scene on its Instagram account with a caption that referenced counterprotesters leaving and celebrating the neo-Confederates for “holding the line” to protect heritage.

Was it a victory for white supremacy?

Richmond City Councilman Michael J. Jones answered that question with an emphatic, “Yes,” Tuesday, about 12 hours after the 9th District representative watched his colleagues torpedo his resolution dealing with the statues of the slavery-defending Confederates that dominate Monument Avenue.

By a 6-2 vote following more than 90 minutes of debate Monday night, City Council killed his proposal to ask the General Assembly to give Richmond the authority to decide the future of the statues that stand as reminders of Richmond’s role as the capital of the Confederacy during the Civil War.

Despite the vote, the legislature is expected to take up the issue of local control of such statues at the request of Charlottesville and other communities that want them removed from public spaces.

Mr. Jones is not giving up and pledged Wednesday to introduce a similar resolution after a commission Mayor Levar M. Stoney set up to review the future of the statues finishes its work in May and presents its recommendations.

While Mr. Jones on Monday rejected the idea that “a vote against the resolution was a vote for white supremacy,” he changed that position a day later.

“Council’s inaction on our right to govern ourselves is indeed a victory for white supremacy and reflective of Richmond’s systematic and historical inequities,” he said.

In his view, the “council failed our citizens. We must focus on our right to legislate in this city, not simply tell the mayor or the administration what to do.”

Ahead of the vote Monday night, he urged the council to be courageous and vote for the resolution.

“There comes a time when leaders must step out front of the polis (constituents), and this is one of those times,” he said. “This is not about erasing history. I wish we could erase all of the vile effects of the Civil War. I wish would could erase the stain of racism in this country. But it can’t be erased. So in discussing the (statues), it’s not tearing down history, it’s not changing it.”

Instead, it is about removing artifacts that were put up to support white supremacy and oppression of African-Americans, he said.

The council vote came two days after a group of Confederate sympathizers rallied at the Gen. Robert E. Lee statue. The rally drew a larger group of counterprotesters, several of whom said they want the statues removed.

The Tennessee-based group, CSA II: The New Confederate States of America, issued a statement Tuesday citing the City Council vote as evidence of the success of their rally last Saturday.

Among the nine council members, Ellen F. Robertson, 6th District, was the only other supporter of Mr. Jones’ resolution.

While she said she believes that challenges such as poverty, affordable housing, education and access to health care far outweigh the importance of whether the statues stay or go, she felt on balance there was no good reason not to support the resolution.

Other council members, such as Kim B. Gray, 2nd District, who sits on Mayor Stoney’s Monument Avenue Commission that is considering how to deal with the statues, felt the resolution was premature.

“I need to hear more voices and more perspectives,” Ms. Gray said in explaining her opposition to the resolution. She said the commission should complete its work before having the council take action.

Ahead of the vote, Mr. Jones told his colleagues that his resolution did not conflict with the commission.

“I see this as operating on a parallel track,” he said, noting “that no matter what the commission recommends, whether it is a contextual placard or removal, we would still need General Assembly permission to act.”

He also acknowledged that could only be the first step given City Council actions long ago to accept the statues and pledges to maintain them in perpetuity.

Before the vote, 23 people spoke before the council.