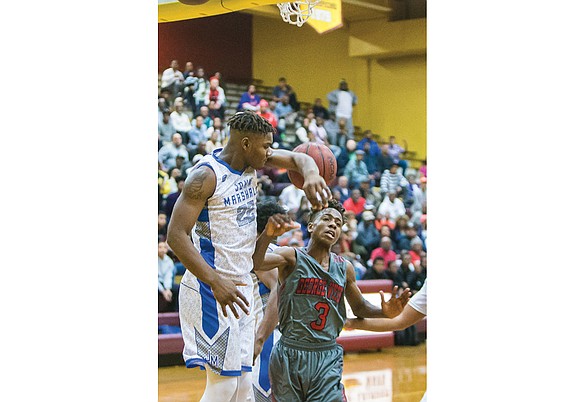 The springy, 6-foot-2, 176-pound junior has led a 3-point rampage heading into the 3A East Region playoffs.

Williams put together back-to-back games about as impressive as any Bulldog in the program’s proud history during Conference 26 action at Petersburg High School last week.

The marksman known as the “Gene Machine” nailed eight 3-pointers and scored 35 points in a quarterfinal victory over Petersburg High School.

No one-night wonder, Williams followed with 26 points and six 3-pointers in a semifinal win over Hopewell High School.

Before that, Williams sank six treys and had 21 points in a Jan. 28 win over defending 4A state champ Monacan High School.

Williams offers no magic formula for his success.

“No one in particular taught me how to do it. I just shoot,” Williams said.

But before a player can shoot a 3-pointer, he must get open. It’s not like tossing a free throw.

“I try and beat my man to the spot and get the shot off before he can get to me,” Williams explained.

The 2015 State Champion Bulldogs are 17-6 this season following a 56-53 loss to John Marshall High School on Friday, Feb. 17, in the Conference 26 finals in Petersburg. The two schools continued play this week in the 3A East Region.

Williams honed his smooth, long-distance shot as a youngster at Bellemeade Community Center. On the middle school level, he played a heavy role for city champions for two different schools. As a seventh-grader, he showed off his jump shot for champion Boushall Middle School. In eighth grade, he led Thompson Middle School to the same title, once hitting eight 3-pointers in the same game.

“I may enjoy basketball more, but I might have more of a future in football,” he said of his college options.

He has gone from the Bulldog’s six-point leader for touchdowns in football to its three-point leader on the hardcourt.