Candidates line up for Nov. 7 election for Richmond offices 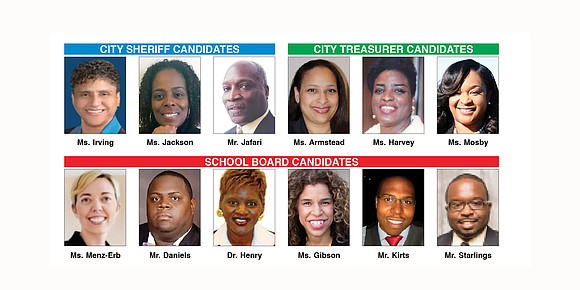 Now Antionette Irving, a retired major from the Henrico Sheriff’s Department, will face two independent challengers in the Nov. 7 general election in her bid to become Richmond’s next sheriff.

The Democratic nominee will face Nicole Jackson, a former major in the Richmond Sheriff’s Office who is making her first bid for public office, and businessman Emmett J. Jafari, who previously has challenged Sheriff Woody.

Both qualified for the ballot, according to Richmond Voter Registrar Kirk Showalter.

A third potential challenger, former Richmond Police detective Kenneth Foster, did not qualify, Ms. Showalter said. He did not submit the required number of valid signatures on his candidate petitions, she said.

The race is to succeed retiring city Treasurer Eunice Wilder, who has served since 1992. Most of the office’s work involves collecting unpaid state income taxes.

The final local race on the Richmond ballot involves filling the 3rd District School Board seat previously held by Jeff Bourne, now a delegate to the General Assembly.

Cynthia Menz-Erb was appointed to fill the seat earlier this year and is now seeking her first term.

The three other challengers, Dr. Henry, Ms. Gibson and Mr. Kirts, competed with Ms. Menz-Erb for the School Board appointment.