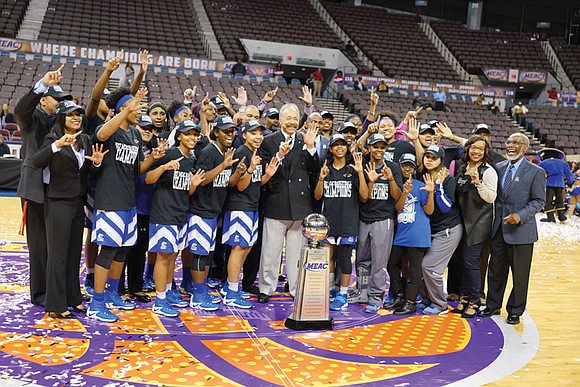 The Hampton University Lady Pirates celebrate their sixth MEAC title under Coach David Six that was clinched in last Saturday’s 52-49 victory over Bethune-Cookman University at the Norfolk Scope. At the center of the celebration is Hampton University President William R. Harvey. Randy Singleton

Now it’s on to the NCAA Tournament for Coach David Six’s Lady Pirates, who will play Duke University on Saturday, March 18, in Durham, N.C.

Hampton is the 15th seed, while Duke is the No. 2 seed in what is the Bridgeport, Conn., Region.

On the season, HU’s top scorer has been Virginia Commonwealth University transfer Monnazjea Finney-Smith with an average of 12.5 points per game. Finney-Smith is from Portsmouth’s I.C. Norcom High School. Her brother, Dorian Finney-Smith is a rookie with the NBA’s Dallas Mavericks. Another brother, Ben Finney, is a former standout at Old Dominion University.

HU’s last MEAC crown came in 2014. The Lady Pirates then lost to West Virginia in the first round of the NCAA Tournament.