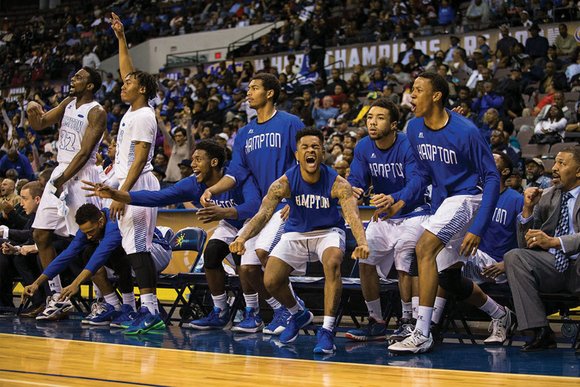 The Hampton University men’s basketball team erupts in celebration Saturday night as the Pirates put the finishing touches on its 81-69 victory over South Carolina State University to win the MEAC Tournament at the Norfolk Scope. Hyunsoo Leo Kim/The Virginian-Pilot

Of 68 teams chosen for the NCAA, Division I, basketball tournament, Hampton University has drawn one of the most challenging first round games.

Coach Buck Joyner’s Pirates, which won the MEAC championship last Saturday, will travel to PNC Arena in Raleigh, N.C., on Thursday, March 17, to face the University of Virginia and ACC Player of the Year Malcolm Brogdon.

The game, with at approximate 3:05 p.m. tipoff, will be broadcast live on truTV.

Despite a powerful season, Hampton is seeded No. 16, or last, in the NCAA’s Midwest Region. The University of Virginia, which was the runner-up on last Saturday’s ACC tournament, is ranked No. 1 in the region.

That’s the deflating news. No 16th seed team has ever upset a No. 1 team.

More cheerful news is that HU, the proverbial David to U.Va.’s Goliath, is used to carrying a slingshot in its gym bag.

A year ago, HU faced then-undefeated University of Kentucky in Louisville in the second round of the 2015 NCAA Tournament and lost 79-56.

MEAC teams generally receive No. 16 seeds, or are relegated to the First Four like HU was last year, posting a win over Manhattan College before facing the University of Kentucky.

Still, there is uplifting history in HU’s corner.

And just three seasons back, No. 15 Norfolk State University played Cinderella with an upset of No. 2 University of Missouri.

Hampton has played U.Va. seven times over the years in regular season games and is 0-7.

While the Pirates are extreme long shots to advance in Raleigh, they had the upper hand last weekend at the Norfolk Scope, where they rolled to their sixth MEAC title.

Senior Reginald Johnson Jr., with 21 points and eight assists against S.C. State University, was Most Valuable Player of the MEAC Tournament. Brian Darden had 22 points and made seven straight free throws down the stretch. Quinton Chievous had 13 points and seven rebounds.

Jervon Pressley came off the bench for 14 points and nine rebounds.

HU has fared better in Division I MEAC than it did in its long association with the Division II CIAA.

While HU is coming off a victory, U.Va. isn’t. Coach Tony Bennett’s 26-7 Wahoos lost Saturday night to the University of North Carolina Tarheels in the ACC final in Washington

Still, U.Va. is ranked No. 3 nationally in the Rating Percentage Index power ranking. Hampton is No. 160 of 350 schools, with a 324 strength of schedule.

The Hampton-U.Va. victor will advance to the March 19 second round game in Raleigh against the winner of the Texas Tech-Baylor game.