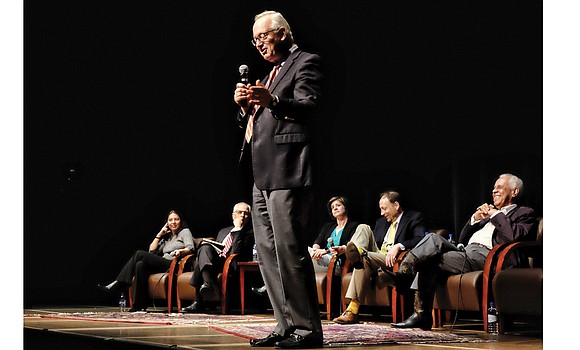 Their comments came as part of a public symposium, “Popular Politics, Populism and Donald Trump: Who Are ‘We the People’?” hosted March 22 by Virginia Commonwealth University’s Wilder School of Government and Public Affairs.

“I am convinced,” Mr. Wilder told the crowd of nearly 200 at VCU’s Grace Street Theater, “that the biggest enemy facing the American people today is the same enemy that’s been there all along — and that’s the enemy within.”

Mr. Wilder said the issues facing the nation, including President Trump and others like him, did not suddenly materialize, but have “been around for a while.”

“The richest, most powerful nation in the world has been there for some of its citizens, but is slow to recognize the needs of others,” he said.

Mr. Wilder, who was the nation’s first elected African-American governor, emphasized the importance and impact of citizen involvement.

He pointed out that the only definition of citizenship written in the U.S. Constitution comes in the 14th Amendment. He reminded the audience that the Reconstruction-era change to the Constitution was made only “after the war was fought to preserve the Union.”

Political analyst Robert Holsworth, who is managing principal of DecideSmart, moderated the hour-and-a-half discussion, starting with musings about the political landscape that led to President Trump’s victory in November.

The panelists seemed to agree that public support for the anti-establishment sentiment expressed by both Democratic candidate Bernie Sanders on the political left and then-candidate Trump on the right was the result of years of dissatisfaction with Washington policies and partisanship. Dr. Holsworth concluded that such dissatisfaction among liberals contributed to the defeat of Democratic presidential nominee Hillary Clinton.

“What’s interesting now is we’re almost seeing a populist reaction on the other side,” Dr. Holsworth said. “The long-term question …is whether the political leadership in both parties has any real answers right now to those kind of anxieties that people have expressed” in the Democratic primaries and the November election.

Panelist Jack Trammell, a Randolph-Macon College professor and 2014 Democratic congressional candidate who lost to Republican Dave Brat, said he believes the country can return to full public confidence, “but I also think we have a lot of work to do.”

Responding to audience questions, Dr. Trammell urged young people to run for political office. He also told the crowd he currently has no plans to run again for public office.

The conversation briefly shifted to the racist elements of the 2016 election with an audience question that drew parallels between President Trump’s campaign and the Republican Southern Strategy of the late 1960s. GOP politicians, including President Richard Nixon and Barry Goldwater, employed the strategy that capitalized on racism against African-Americans to win white Southern voters. The questioner’s long inquiry seemed to irritate Mr. Wilder, who interrupted and tried to facilitate panel members’ responses.

“Certainly, I think that was an element in the Trump campaign,” Dr. Holsworth said. “At the same time …I just don’t think that that was the primary reason that Donald Trump was elected, though it is certainly true that he had clear support from that.”

Panelist Alexandra Reckendorf, an assistant professor of political science at VCU, also pointed to the popularity of the Trump campaign’s repudiation of political correctness.

“I think you had a population who felt like a lot of things moved way too fast,” said Dr. Reckendorf, noting the increased attention given to Muslims, LGBTQ rights issues and the rise of the Black Lives Matter movement during the last few years.

She said President Trump’s supporters didn’t necessarily agree with “the extremes” he expressed, but they liked that the businessman and television personality was willing to articulate unpopular things and was “strong enough to be immune” to criticism.

“We cannot afford to waste further time with wailing and gnashing of teeth,” Mr. Wilder said. “We are the people and I think it’s so important to understand that we need to ask the questions as to what can we do — what can you do?”