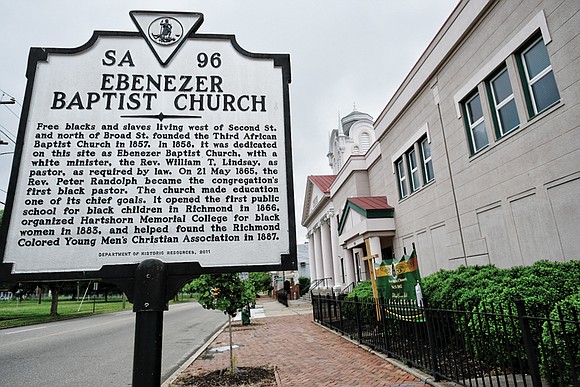 Ebenezer Baptist Church has stood at the corner of Leigh and Judah streets since its founding in 1857. For more than a century, members of the Jackson Ward church have made significant contributions to civic life in Richmond.

Ebenezer Baptist Church will host a series of public events this week to mark its 160th anniversary as a beacon of faith in Jackson Ward, it has been announced.

The milestone celebration for one of Richmond’s oldest African-American churches begins 6 p.m. Friday, May 26, at the church, 216 W. Leigh St., with a community conversation focusing on “Ebenezer’s Role in Jackson Ward.”

On Saturday, May 27, the church will host a jazz vesper service at 5 p.m., featuring Glennroy Bailey & Co. The service is open to the public without charge.

The events will wrap up Sunday, May 28, with an anniversary worship service. The guest speaker is the Rev. Wilbert D. Talley, president of the adoption advocacy group Virginia One Church, One Child and pastor of Third Union Baptist Church of King William County.

The church will host a history tour following the service.

An offshoot of First African Baptist, Ebenezer Baptist has stood at the corner of Leigh and Judah streets since its founding in 1857, four years before the start of the Civil War.

Along with worship services, Ebenezer has engaged in community service.

In 1866, amid the recovery from the war, Ebenezer opened the first public school in Richmond for African-American children.

In 1883, Hartshorn Memorial College, which opened to provide higher education for African-American women, spent its first year at Ebenezer. The college moved the following year to what is now the site of the Maggie L. Walker Governor’s School and operated independently until it merged in the early 1930s with Virginia Union University.

And former members have founded other churches, including Cedar Street Memorial Baptist and Mt. Carmel Baptist in Church Hill and Riverview Baptist in the West End.

The congregation also was involved in the Civil Rights Movement and has remained active in the community in the decades since, according to the Rev. Brenda B. Summerset, the church’s minister of Christian Education and chair of the Anniversary Committee.

Looking ahead, members now are focused on the church’s “search for a new pastor to bring us a new vision,” Rev. Summerset said. Dr. Levy M. Armwood Jr. is retiring June 30 after nearly 15 years as Ebenezer’s pastor.

For example, she said the Men’s Ministry mentors children at Carver Elementary School and raises money for school supplies, while the Women’s Ministry participates in community health and wellness programs.

“One of our mission circles works with the prison system to assist families of the incarcerated with food and other needs,” said Rev. Summerset.

“We also work with CARITAS to host the homeless for at least one week each winter,” she said.

“We’ll also be holding a summer Bible Institute that is open to the community, and we have a sister-church relationship with Second Presbyterian Church to promote racial reconciliation.”

Like other congregations in Downtown, Rev. Summerset said, “We’re trying to do our small part to help people and make the city a better place.”