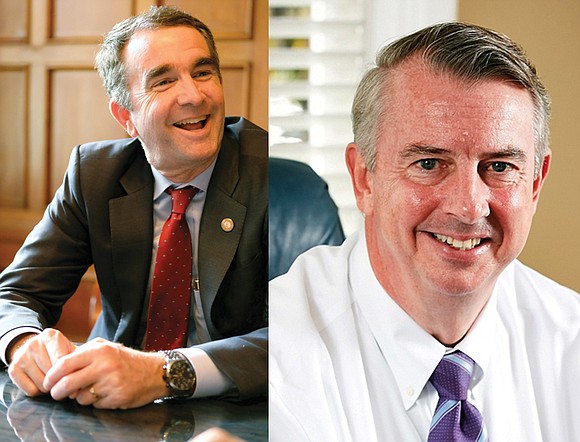 Now it’s up to the voters.

Tuesday, Nov. 7, is Election Day — when ordinary citizens will troop to polls in Richmond and across Virginia to decide who will become the commonwealth’s 73rd governor and succeed the current chief executive, Democrat Terry McAuliffe.

Little-known Libertarian Cliff Hyra, 34, a patent attorney, also is on the ballot.

While the focus is on state issues, nationally the race for Virginia’s governor is being viewed as an early referendum on the presidency of Donald Trump, the most unpopular president ever.

If Lt. Gov. Northam wins big, the results are likely to be viewed as a sign that the resistance to the Republican president is gaining strength ahead of the 2018 congressional elections, while a Gillespie victory would devastate Democrats and show that allying with President Trump and his anti-health care, anti-immigration policies is a good idea.

While polls have swung wildly, the average appears to show Lt. Gov. Northam leading his Republican rival by about 4 percentage points heading into the only poll that counts — the vote on Election Day.

Historically, Virginia tends to elect as governor a member of the political party that lost the presidential election the previous year, a favorable omen for Lt. Gov. Northam.

Only current Gov. McAuliffe, who is constitutionally barred from running for a second term, was the first to win when his party controlled the White House in the past 10 gubernatorial elections. He claimed a narrow victory in 2013, a year after President Obama won a second term.

With President Trump holding the levers of power, “Democratic voters are far more enthusiastic to cast ballots than their Republican counterparts are,” according to Dr. Rachel Bitecofer of Christopher Newport University in Newport News, which has done extensive polling on the race.

While the president has been tweeting praise for Mr. Gillespie with increasing enthusiasm, most political experts see him as a net negative for the Republican.

Still, turnout remains a question in a campaign where there has not been a standout issue. Typically, the percentage of Virginia voters going to the polls drops 25 to 30 percentage points in the governor contest compared with presidential election years.

The Northam campaign is hopeful, pointing to a large volume of donations and the strong showing in volunteer help.

Still, there is little sign that African-American voters, a major element of the Democratic base, are as motivated.

James “J.J.” Minor III, chairman of the Richmond City Democratic Committee, candidly told committee members a few weeks ago that the Northam campaign was “boring” and failing to ignite essential enthusiasm. Others have told the Free Press the same.

There have been efforts to turn on African-American voters, who are key to a Democratic victory. For example, the Black Political Action Committee is investing $1.1 million to boost turnout.

Meanwhile, Mr. Gillespie has stumped in public housing communities, courted African-American contractors and spoken, like Lt. Gov. Northam, at last week’s state NAACP convention to show that he is open and willing to listen to varied groups, even craft policies reflecting those talks.

Yet it is unclear whether Mr. Gillespie has carved into African-American support or that Lt. Gov. Northam has made a real connection in promising to continue the progress made under Gov. McAuliffe, who talks up Virginia’s low unemployment rate and the huge surge in jobs and business developments on the Democrats’ watch.

In what many have seen as an act of desperation, Mr. Gillespie sought to use TV ads that seek to paint Lt. Gov. Northam as an ally of a murderous Latino gang called MS-13.

Fact checkers have debunked the Gillespie ads that some have called a “dog-whistle” to Trump supporters.

Lt. Gov. Northam, meanwhile, has been able to publicly appear with the still popular former President Obama in a bid to rally Democratic support.

While the trends seem positive, Lt. Gov. Northam’s supporters are seeking to avoid overconfidence as they await the voters’ verdict.