10 vying for School Board appointment 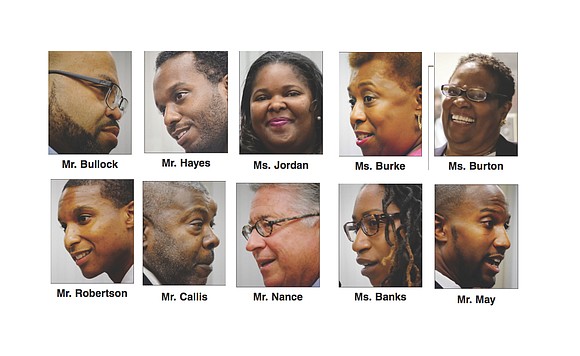 During the four-hour process before the board’s eight members, many of the candidates cited community engagement and student achievement when asked by the board to identify a “top priority” within Richmond Public Schools.

Résumés and interest statements obtained by the Richmond Free Press through a Freedom of Information Act request show the pool of 10 applicants has an array of educational, professional and leadership experience.

The School Board is scheduled to appoint someone to the seat at its next meeting on Monday, Oct. 16, with the appointee to be sworn in on Tuesday, Oct. 17.

“I see the top priority as representing the constituents — the students, the parents of the 7th District — and being a voice for them when we’re picking a superintendent for our school district,” said retired RPS educator Sharon C. Burton. “My role, then, is to listen to the constituents to see what it is that they are looking for.”

Ms. Burton now works as a teacher and site coordinator at Peter Paul Development Center in the East End. She said her work there with colleagues in the millennial age group equips her with new, intergenerational insight.

Pointing to experiences with RPS students in his Real Deal Life Skills training program, Garry Callis Sr. named his top priority as “teach time.” He explained the concept as “maintaining control of our classrooms” so teachers can teach “and kids who are there to learn can actually receive the quality education” RPS teachers can deliver.

“I would like to see a whole audit in the exceptional ed department,” he said, “to see where we could do some fixes.” He also added that, if appointed, he would pass up the position’s $10,000 annual compensation.

“That’s one thing that I bring to the table. I’m not asking for any money. I would do (the job) for free.”

“I think the top priority is student achievement,” said Cheryl L. Burke, who retired after serving as principal of Chimborazo Elementary School for nearly 20 years. “We have had the opportunity in the past — and we can do it again — of having a great curriculum in place to support the central administration as they put in place what’s necessary for our children.”

Attorney Charles Nance described the school district’s aging infrastructure as a “moral crisis” that must be confronted.

“I know that things are strapped, but we have to look outside the usual sources and really approach in appropriate ways the legislature, private donors and others and just get the urgent things done.”

A former Richmond School Board member who ran for mayor in 2004, Mr. Nance assured the board he would only serve for the interim term, and has no intention to stand for election to the seat once the appointment expires next year.

The 7th District seat was left vacant when Nadine Marsh-Carter stepped down Sept. 5 in the wake of her husband’s death in July. The board opted to put off a special election until November 2018, and fill the position in the meantime with an interim appointment. The 7th District includes Church Hill, East End and Fulton.

Of the seven schools within the 7th District, only Franklin Military Academy and Fairfield Court Elementary are fully accredited. Bellevue Elementary is partially accredited with a warning because of slowly improving SOL pass rates.

He admitted with a chuckle that he didn’t think he’d return to Richmond after graduating from Richmond Community High School in 2009 and leaving for college in Washington. He suggested using more technology and social media platforms to increase engagement among younger parents.

“I’m not talking about posting something on Facebook,” he said, “but using things like Snapchat and Instagram — things these parents are actually using so that they can see how their child is learning.”

“In my work, I’ve come across a number of families and parents who don’t understand what’s going on with their students, the materials coming from the schools and are unaware of the decision-making processes simply because they don’t speak English,” he said. “Part of our role should be to ensure that everyone is part of the conversation.”

“I think what separated a lot of student experiences in a lot of programming was actual parent and community engagement,” he said, recalling his time as an RPS student. Mr. May said he would work to make sure constituents are informed of the school district’s existing programs.

Federal Defense Department auditor Corrisse L. Jordan said she has been away from Richmond for the last two decades, but said she’s eager to reacquaint herself through service. She said as a student who began in Richmond Public Schools, but finished elsewhere, she was able to see the difference “in some of the resources and tools I had available” while a student.

She said her main priority would be ensuring RPS students have opportunities and resources to become competitive members of a global workforce.

VCU student and grants administrator Kai Banks also said parental engagement is a top priority. “If Richmond had more of a streamlined process where parents could get involved, and felt heard, but also understood what was going on, there would be more support,” she said. “I think there are a lot of really great organizations, as well as parents within Richmond Public Schools, that could be assets.”

Following interviews, several area residents spoke in support of the various candidates. During the 45 minutes of public comment, one man implored the board to view the 7th District appointment solely as an interim position.

“On Oct. 17, a little over 20 percent of this board will be appointed not elected,” he said, making reference to the board’s appointment in March of Cindy Menz-Erb to the 3rd District seat. She replaced Jeff Bourne, who was elected to the House of Delegates. Ms. Menz-Erb is running with four other candidates in a special election for the seat on Nov. 7.

“If people can be appointed to a board, ride the incumbency advantage, and then ride to higher unopposed office, that’s concerning for the democratic process,” the man told the board.