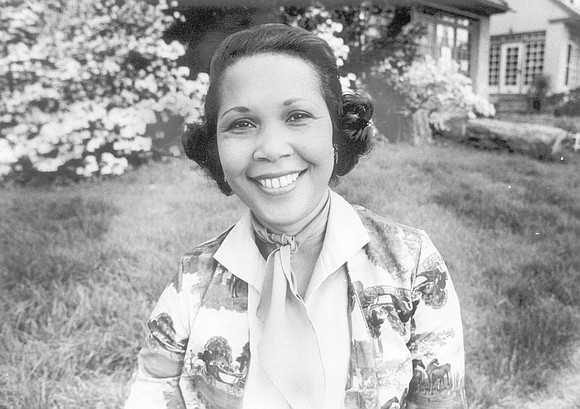 Today’s students need to continue to speak out when they see injustice.

That was the message from Joan Johns Cobbs, the younger sister of the late Barbara Johns, and Mrs. Cobbs’ classmate, Joy Cabarrus Speakes, as Virginia prepares to celebrate the first Barbara Johns Day on Monday, April 23.

Barbara Rose Johns was just 16 when she organized and led a student walkout on April 23, 1951, to protest the substandard conditions and resources at the all-black Robert Russa Moton High School in Prince Edward County. The action morphed into a lawsuit, Davis v. School Board of Prince Edward County, that became part of the landmark U.S. Supreme Court ruling in Brown v. Board of Education in 1954 that began dismantling racially separate and unequal policies in public education.

The Virginia General Assembly voted in 2017 to honor Ms. Johns with an annual day beginning this year.

Now, 67 years after protesting alongside Ms. Johns, Mrs. Speakes told the Richmond Free Press this week, “We’re still looking at some of the same things,” particularly when it comes to racism and the poor condition and lack of resources afforded schools in African-American communities.

“When you look at what happened in Charlottesville, that’s a prime example of where everything just took you back to the Jim Crow era,” she said of the deadly violence that broke out last August between white supremacists and neo-Nazis supporting the statues honoring Confederates in public parks and counterprotesters. “You get to understand that there’s a movement that has to continue.”

“Some people say we have arrived, but we have not,” said Mrs. Speakes, now 79 and a Prince Edward County resident again after a career as a corporate executive in sales in the New York-New Jersey area. “We are still on the train trying to get this as far as we can, and it has to be through the movements of the younger generations to keep that going.”

Mrs. Cobbs and Mrs. Speakes were 12 when the strike took place. Neither had any idea what was about to unfold until they gathered for an assembly expecting to see their principal and, instead, heard a speech by Ms. Johns announcing the walkout. Both said they feared being thrown in jail, retaliation from the Ku Klux Klan and their parents’ reactions. But they said they were inspired to act that day in support of justice.

Now 79 and a resident of New Jersey, Mrs. Cobbs and Mrs. Speakes were at the Moton School on Sunday providing recollections of that historic time. Both expressed being encouraged by Black Lives Matter protesters and the recent groundswell of student activism calling for gun control following the Feb. 14 mass shooting at a Parkland, Fla., high school in which a former student armed with a military-style assault rifle killed 17 people.

Pointing to the energy, optimism and new ideas that often come with youth, Mrs. Cobbs said people generally “pay more attention” when young folks start a movement. Such was the case, she said, with the 1951 Farmville protest.

“The majority of people were shocked at the fact that a student could lead something like this,” Mrs. Cobbs said.

She said some parents initially were reluctant to support the students who were striking because of the dilapidated conditions in their school. Classrooms heated by wood stoves were cold and pails were scattered around to catch water from leaky ceilings during the rain, according to accounts at the time.

But in the end, parents stood with their children. “I think they felt that maybe this would result in something greater,” said Mrs. Cobb, a retired member of the U.S. Marshals Service.

Parents at the Moton School had unsuccessfully lobbied the school board for a new, bigger school. The building housed more than 400 students, but was only meant to accommodate 180. The board’s solution was to build the now-infamous tarpaper shacks with leaky roofs and no bathrooms.

The lack of resources for the all-black school stood in sharp contrast to Prince Edward County’s new and well-furbished high school for white students.

Moton students also were given second-hand textbooks and were transported on inadequate school buses. A month and a half before the strike, five Moton students were killed when a train struck their stalled school bus at Elam Crossing.

According to some reports, Ms. Johns began recruiting a secret planning committee for the strike after she saw a better-equipped school bus for white students pass by when she was late catching her bus.

After the strike, the Johns family was harassed. The KKK burned a cross in the yard of the family’s home. Ms. Johns was sent to live with relatives in Montgomery, Ala., but returned the following school year. She went on to attend Spelman College and Drexel University and was a librarian for 24 years until her death in 1991 at age 56.

Mrs. Cobbs shared that her sister “had some regrets” about the strike when Virginia officials decided to close public schools rather than desegregate in defiance of the ruling by the nation’s highest court.

“She didn’t regret what she had done. She just felt very sad about the children who lost their education,” Mrs. Cobbs said.

She said she’d like her sister to be remembered as a young person who had an idea to make things better and then stood up for what she believed. She also would like people to keep in mind that “anyone, no matter how young, can make a difference in this world.”

Make sure they voice their opinions and take action when they see something wrong, like Ms. Johns did.

“We were all young, but we made it happen,” Mrs. Speakes said.