Coach Tubby Smith gets the boot at Memphis 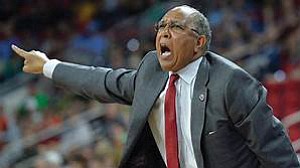 Memo to colleges in search of a new basketball coach: One of the very best, Tubby Smith, is available again.

With Richmond roots, Smith is among college basketball’s most successful coaches. He is also among the most traveled.

The former Virginia Commonwealth University assistant coach was fired March 14 from the University of Memphis despite a 21-13 record this season and a 40-26 mark over two campaigns.

University officials cited dwindling attendance and donations for its decision. The school was eager to bring alumnus and former NBA star Penny Hardaway aboard. He was hired Tuesday as Coach Smith’s successor.

“After 39 years of college coaching, I know that change happens and I wish the university and the team the best as they pursue a new direction,” Coach Smith tweeted.

The 66-year-old former Richmonder has surpassed John Thompson as the most winning African-American coach in NCAA Division I history.

Richmonders fondly remember Coach Smith as an assistant under former VCU Coach J.D. Barnett in 1979 to 1986. The Rams were 144-64 during that stretch, with three Sun Belt titles and four NCAA berths.

Breaking up is hard to do. Memphis owes Coach Smith $3.25 million for each of the next three seasons.

Along with Lon Kruger, who is now at the University of Oklahoma, Coach Smith is one of two coaches to lead five different schools to the NCAA Tournament.

More coaching chapters are likely to be written by Coach Smith.

“As a lifetime competitor, I believe that the game never ends, and I’ll be exploring the next move on and off the court in the coming weeks,” he tweeted.

Generally, about 50 Division I jobs open each year.

Before Coach Smith became famous as a coach, he was an outstanding college player at High Point, now a member of the NCAA Division I Big South Conference.