Morrissey found to have violated a State Bar rule 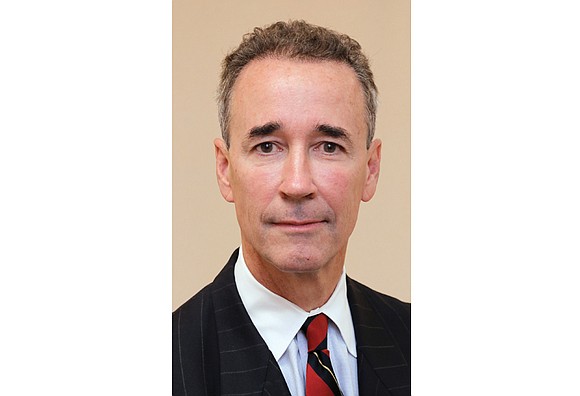 Attorney Joseph D. “Joe” Morrissey moved a step closer this week to being disbarred for the second time in his legal career after a three-judge panel upheld one count of serious misconduct against him.

The panel, led by Chief Judge Paul W. Cella of the 11th Judicial Circuit that includes Petersburg, agreed Wednesday that the Virginia State Bar had presented “clear and convincing evidence” of violating a State Bar rule based on Mr. Morrissey’s 2013 conviction on a misdemeanor charge of contributing to the delinquency of a 17-year-old receptionist at his law office.

Mr. Morrissey, 60, has since married the young woman, Myrna Pride.

The violation involves the State Bar rule that provides sanctions for “committing a criminal or deliberately wrongful act that reflects adversely on the lawyer’s honesty, trustworthiness or fitness to practice law.”

The panel’s finding followed testimony that began Monday from numerous witnesses on charges brought against Mr. Morrissey by the State Bar in the wake of the criminal case.

The panel, which also includes senior Judges Jonathan C. Thacher of Fairfax and Louis R. Lerner of Hampton, had not issued a decision by the Free Press deadline on Wednesday on any punishment they might mete out to Mr. Morrissey.

The panel has a range of options — from a reprimand to disbarment.

The panel is still hearing evidence on issues involving Mr. Morrissey at the John Marshall Courts Building near City Hall.

Mr. Morrissey, a former member of the House of Delegates and former city commonwealth’s attorney, lost his license to practice law in 2003. But it was reinstated six years ago by a divided state Supreme Court, which overruled objections from the State Bar.

In the current proceeding, the bulk of the State Bar’s charges involve Mr. Morrissey’s actions as a lawyer in dealing with the criminal charges that grew out of his relationship with Ms. Pride that became public after her father filed a complaint.

In her opening statement, State Bar attorney Christine Corey detailed a litany of alleged lies and false documents Mr. Morrissey presented in Henrico Circuit Court after he was charged with felonies stemming from his sexual relationship with a minor.

The case ended in a plea deal under which Mr. Morrissey was convicted of the misdemeanor of contributing to a minor’s delinquency and served three months in jail.

But the panel appeared less than impressed with much of the State Bar’s case after hearing testimony from members of the legal team that represented him during the criminal case, including former state Attorney General Anthony Troy, former Delegate Ward Armstrong and James T. Maloney.

Ms. Corey, for example, had indicated the State Bar would show that Mr. Morrissey had orchestrated his defense during the criminal case and had presented false information in a defense summary of that case when he accepted the plea deal.

On Tuesday, Mr. Troy, Mr. Armstrong and Mr. Maloney cast doubt on the State Bar claims. In separate testimony, the three attorneys told the judges that they ran the defense and developed the defense summary that was presented to the court.

In his testimony, Mr. Troy made it clear that the information included in the defense summary was presented to the Henrico court with the plea deal on “a good-faith basis” and reflected the defense that would have been presented if the case had gone to trial.

Each of the attorneys also testified that they did not engage in misconduct nor did they witness any misconduct on the part of their client, Mr. Morrissey, as it involved the securing of documents, the preparation of witnesses or any other facets of the criminal case, including the writing of the defense summary.

That testimony led the panel to throw out other charges the State Bar had brought.