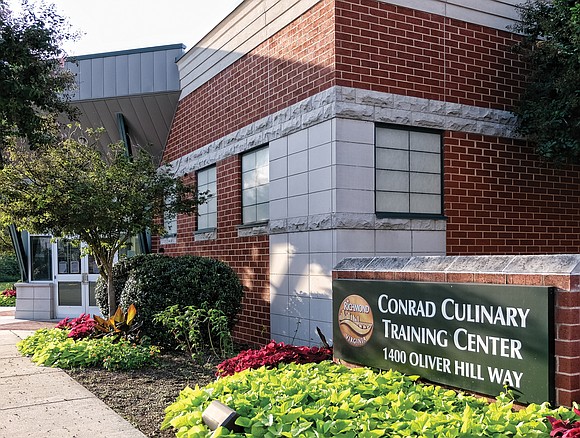 The Conrad Center, located in Shockoe Valley, will be able to accommodate 150 to 175 people as the city’s overflow shelter for the homeless this winter. The building initially opened as a soup kitchen and most recently has housed the city Office of Community Wealth Building’s job development programs. The culinary program closed more than two years ago. Photo by Sandra Sellars Richmond Free Press

Homeless people in Richmond could face a bigger challenge to survive the coming winter’s bitter cold.

Instead of heading to the former Public Safety Building near City Hall to stay warm overnight, homeless people will need to go to the Conrad Center at 1400 Oliver Hill Way in Shockoe Valley.

Mayor Levar M. Stoney announced the change after he and city staff determined the space at the Public Safety Building was too “deplorable” to continue to be used for housing “some of our most vulnerable citizens.”

The decision came after a proposal collapsed last month from the operator of the city’s overflow shelter, Commonwealth Catholic Charities, to buy a former church on Bainbridge Street in South Side as a replacement space for homeless services.

For at least four years, the Public Safety Building has been the last-resort shelter when the overnight temperature is 40 degrees or below between Oct. 1 and April 15, and beds are filled in shelters operated by nonprofits such as CARITAS and the Salvation Army.

Unlike the Public Safety Building, the Conrad Center, a former soup kitchen the city now owns across from the Richmond Justice Center, is surrounded by steep hills. While the center is a short drive from City Hall, it is a longer and harder walk, particularly when people have to leave in the morning.

“The long-term goal is to find permanent, suitable housing year-round so that we don’t have to have this same challenge every year,” the mayor continued. “That is why I support 6th District Councilwoman Ellen F. Robertson’s ordinance that would require the city to develop a strategic plan to address homelessness.”

The Conrad Center, which currently houses job development programs operated by the city Office of Community Wealth Building, was chosen because it has suitable restrooms, reliable heat and enough sleeping space to accommodate 150 to 175 persons, according to city officials. Community Wealth Building is relocating its programs to the East District Center, 701 N. 25th St., during the winter.

“In an ideal scenario, we would have an organization or a ministry that would have been able to step up and commit to providing shelter during the winter months. And that organization or ministry would have access to a site in a neighborhood filled with residents who embrace the opportunity to help people in need,” said Reggie Gordon, interim deputy chief administrative officer for human services.

“That did not happen,” Mr. Gordon said. “Therefore, the city will step up with the Conrad Center and rely on existing shelter, hoping that they, too, will be able to expand their bed space on the coldest nights.”

Unmentioned is the fact that the city also is trying to clear out the Public Safety Building amid negotiations with a private group that wants to demolish the structure as part of a tentative redevelopment plan aimed at replacing the current Coliseum.

Mr. Gordon said people who lack a place to stay should start planning so they do not “have to rely on the city’s shelter.” Persons in need of help should call the Housing Crisis Line, (804) 972-0813, for a referral to the appropriate shelter. He also urged people who may need to use the city shelter to go to Commonwealth Catholic Charities’ office, 511 W. Grace St., to secure a referral to the Conrad Center.

He said the referral would be required and warned that homeless people might be turned away if they don’t follow that procedure.

In past years, people who showed up at the overflow shelter were encouraged, but not required to have such a referral.

Mr. Gordon said the city’s shelter is just for warmth. People who come, he said, would not be fed and would not be allowed to bring pets inside.

Mr. Gordon also noted that Senior Connections, the Capital Area Agency on Aging, also offers heating help to the elderly and residents with disabilities, at (804) 343-3000.