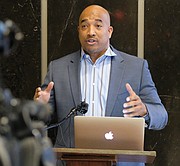 The battle over Richmond’s Confederate statues on Monument Avenue is headed back to City Council.

The three-member Land Use, Housing and Transportation Committee voted unanimously Tuesday to send a new resolution aimed at giving the city control of the statues to the nine-member council for consideration.

The resolution may be considered at City Council’s next meeting Monday, Sept. 24.

The committee voted to send the resolution to the council without a recommendation.

“I’m pleased that it made it out of committee,” said a relieved Councilman Michael J. Jones, 9th District, author of the legislation.

The new resolution takes a different approach from his effort last year that was dumped last December when he had the support of only one other council member, Ms. Robertson.

That first resolution would have had City Council request that the General Assembly grant the city authority to remove the tributes to white supremacy.

In the new resolution, Mr. Jones wants the council simply to ask for authority to determine the future of the statues.

“This is not about taking down the statues,” Mr. Jones said. “This is about giving the city the right to decide. We don’t have that right today.”

A long-standing state law blocks the city from altering or removing the statues. The city would need the General Assembly to approve a waiver for anything to change, a long shot at best because legislative control is in the hands of Republican supporters of the statues honoring traitors who sought to dismember the Union to maintain slavery.

If Mr. Jones’ resolution passes, the council would seek a member of the Richmond legislative delegation to patron the bill.

Mr. Jones is uncertain of the resolution’s outcome in City Council this time, but council members no longer will have the excuse used last year to reject the measure.

At the time, a majority of members said they voted against the resolution because they wanted to hear first from a commission Mayor Levar M. Stoney set up to consider the statues.

The Monument Avenue Commission issued its report in July, recommending removal of the statue of Confederate President Jefferson Davis and the addition of explanatory signs on the other four statues to Robert E. Lee, J.E.B. Stuart, Stonewall Jackson and Matthew Fontaine Maury.

Before Tuesday’s committee vote, G. William Thomas, a history advocate and former city Election Board member, urged the members to reject the effort to “remove history” and instead focus on adding to it.

Helen Marie Taylor, now 94 and a leader in the fight five decades ago to save a declining Monument Avenue, also reminded the council of the state statue protection law that she said dates to 1904 and would make the resolution a futile gesture that ultimately would die in the legislature.

In other matters, Ms. Gray postponed for 60 days action on legislation she has sponsored with Council President Chris A. Hilbert, 3rd District, to block the city from installing bike lanes on Brook Road and reducing traffic to one lane in each direction.

“I’m still seeking information,” she said in explaining the decision to put off committee consideration until the November meeting.