Monument Avenue statues to be impacted by 2 proposed resolutions 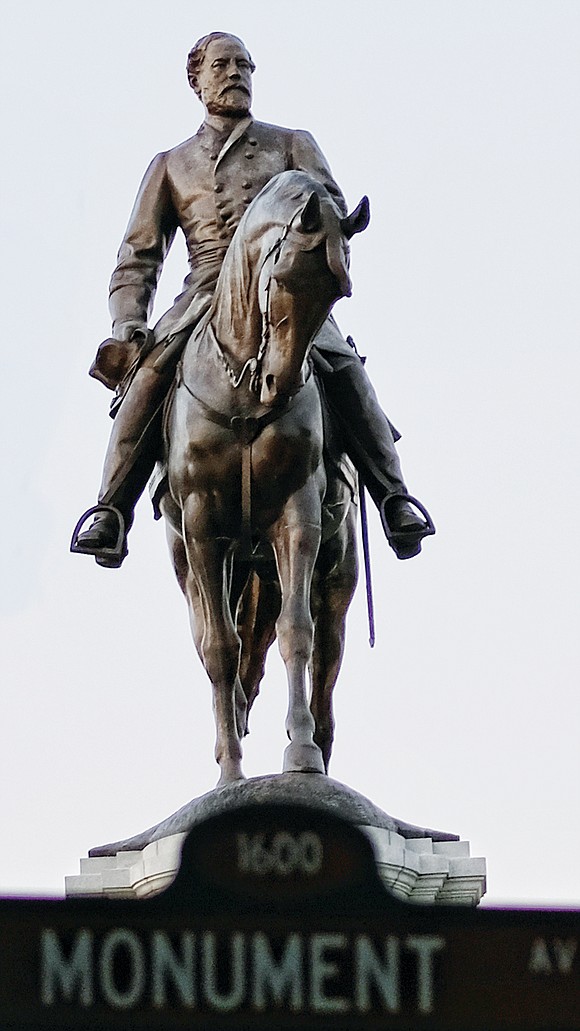 City Councilwoman Kim B. Gray, 2nd District, wants to add a new monument to Monument Avenue that would honor black soldiers who fought in the Civil War.

Separately, Councilman Michael J. Jones, 9th District, is making a third attempt to push Richmond’s governing body to seek authority from the General Assembly to remove from that avenue the Confederate monuments that he regards as blatant symbols of racism.

On Monday, Ms. Gray and Dr. Jones introduced independent resolutions reflecting those aims for council consideration in January. A special council meeting has been called for 5 p.m. Monday, Jan. 6, to consider the Jones resolution and likely pass it.

Both resolutions were submitted on the eve of Tuesday’s ceremony to unveil artist Kehinde Wiley’s “Rumors of War” sculpture on the grounds of the Virginia Museum of Fine Arts.

That sculpture, depicting a modern black man riding a horse, is Mr. Wiley’s response to the statues of slavery-defending Confederates on horseback along Monument Avenue that are registered historic landmarks and that have been a centerpiece of the city’s public art for at least 120 years.

Ms. Gray’s resolution asks City Council to support a new foundation called Honor the 14, which she said plans to privately raise the $6 million to $8 million needed to build a monument to honor the 14 black Union soldiers who were awarded the Medal of Honor for their heroism during the Battle of New Market Heights in 1864 in Henrico County.

The goal “is to put up a heroic monument on Monument Avenue of the size and scope of those previously installed that would pay tribute to the Medal of Honor winners who fought this battle and to call attention to the instrumental role that black Americans played in winning the Civil War,” Ms. Gray said.

“My resolution would put the council on record as endorsing the concept of the monument, authorizing the city administration to develop and implement a plan for installing the statue and requesting the mayor provide a seed grant of $5,000 in the next budget to support the foundation’s work,” she said.

The resolution is set to be considered by the Land Use, Housing and Transportation Committee at its next meeting 1 p.m. Tuesday, Dec. 17, and could come before the council at its first meeting in January if it clears that hurdle. Dr. Jones and Ms. Gray are both members of the committee, which is chaired by Ellen F. Robertson, 6th District.

“Monument Avenue is the appropriate place for the kind of grand monument that is envisioned,” Ms. Gray said.

She noted that the mayor’s Monument Avenue Commission that reviewed the Confederate statues last year had recommended that the city develop and add a monument commemorating the service of U.S. Colored Troops in the Civil War, particularly the 14 Medal of Honor winners at New Market Heights.

Meanwhile, Dr. Jones, with backing from the Richmond Branch NAACP and Mayor Levar M. Stoney, held a news conference Monday to announce that he is reviving his effort to get the City Council to urge the General Assembly to allow Richmond to decide the fate of the Confederate statues on Monument Avenue.

Buoyed by the election of Democratic majorities in both chambers of the General Assembly, he is once again ready to bring the issue back to City Council. The council rejected Dr. Jones’previous resolutions 6-2 in 2017 and 6-3 in 2018. Ms. Gray, whose district includes the area where most of the Confederate monuments stand, was among the opponents.

At the time, the General Assembly’s Republican majority repeatedly rejected local control and kept intact a 1997 law that barred cities from altering or removing Confederate icons from public spaces.

Incoming Charlottesville Delegate Sally Hudson has taken up the cause from her predecessor, David Toscano, and pre-filed legislation to lift the barrier law that also has blocked Charlottesville, Norfolk and Alexandria from removing their Confederate monuments.

Democratic Gov. Ralph S. Northam already has indicated his support for the measure, which Delegate-elect Hudson believes has a better chance for approval in the 2020 session.

Given the prospect that the ban could be lifted, Dr. Jones is eager to make this an issue that the council would need to quickly address in January to present Richmond’s viewpoint to the General Assembly.

He also wants to once again put council members on the spot during an election year. City Council elections will take place in the fall. His resolution also is to come up at the Land Use Committee next Tuesday; he again is expected to have Ms. Robertson’s support to move it to the full council.

Dr. Jones said gaining local control and removing the statues finally would eliminate the giant symbols of bigotry that continue to impact city residents. In his view, there is no neutral position on the Confederate statues.

The underlying question for council members, he said, is “Are you going to be a racist or not? You can’t sit this one out.”

In the two previous votes, Ms. Robertson supported the resolution both times. Council President Cynthia I. Newbille, 7th District, abstained in 2017 and voted with Dr. Jones in 2018. The rest of the council opposed the measure.