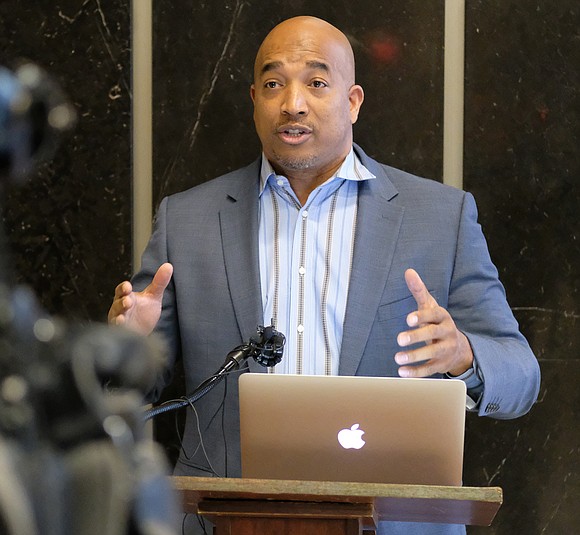 The Richmond City Council took its first step toward control over the statues of the slavery-defending Confederate traitors that line Monument Avenue and have long sat on other public property in the city.

On his third try, 9th District City Councilman Michael J. Jones finally won a positive vote from his colleagues on a resolution seeking from the General Assembly local authority to decide the fate of the increasingly controversial statues.

The 6-2 vote on Monday to add Richmond’s voice to those of Charlottesville, Norfolk, Alexandria and other communities urging local control over such statues came just before Wednesday’s start of the 2020 General Assembly session where bills to make it happen appear likely to be adopted.

Bills to lift a long-standing state ban on tampering with or removing the rebel statues have generated strong support among the Democratic majorities that will control both the House of Delegates and state Senate, along with the backing of Gov. Ralph S. Northam.

The pressure on Virginia to take action, or at least allow localities to do so, has been ratcheting up amid the revival of hate groups waving Confederate symbols and moves by other cities, from Baltimore to New Orleans, to remove their Confederate statues.

Dr. Jones, who considers the statues a racist promotion of white supremacy that needs to be eliminated, sought to downplay the potential impact, declaring during the City Council meeting that “this is not about tearing down statues” but about gaining decision-making authority over them.

“It’s not about erasing or changing history,” he said. “This is about us as legislators doing what we were elected to do — legislate.”

But to many, it also is about getting rid of symbols of Richmond’s segregationist and oppressive past in favor of a more modern vision in which inclusion and diversity are important watchwords.

Mayor Levar M. Stoney issued a tweet applauding the council vote and noting “the ball is now in the GA’s court” on awarding the city authority “to control public spaces.”

Dr. Jones acknowledged later that the adopted resolution only asked for control of statues on city property, which would not impact the Robert E. Lee statue at Monument and Allen avenues that is state-owned and was described in 1890 by African-Americans as a symbol of the increasing oppression they were facing.

Dr. Jones said his resolution addressed “low-hanging fruit,” the statues the city owns, such as those of J.E.B. Stuart, Jefferson Davis, Stonewall Jackson, Matthew Fontaine Maury and A.P. Hill, and that the fight over the Lee statue might have to wait.

Mr. Addison said he shifted his vote because, with the state ban in place, “we can’t even have a dialogue” about the statues. He was a member of Mayor Stoney’s Monument Avenue Commission that in 2018 recommended removing the statue to Confederate President Jefferson Davis.

Mr. Hilbert said the likelihood that the legislature would vote to approve local control persuaded him. In his remarks, he quoted the defeated Gen. Lee in 1869 urging that no statues be put up to memorialize the war in response to federal plans to create the Gettysburg battlefield park.

Mr. Hilbert said the general’s remarks were even more appropriate for Richmond in indicating his support for removing any statues to the rebels. He also rejected complaints the resolution created division. “What was divisive was these monuments being put up in the first place,” Mr. Hilbert said.

Councilwoman Kim B. Gray, 2nd District, who represents Monument Avenue and supports adding statues to the street honoring African-Americans, did not attend the meeting, although she was expected to oppose the resolution. She said later she was at a local hospital with her seriously ill daughter.

Ms. Gray has noted previously that she would like a statue added on Monument Avenue honoring the 14 African-American Civil War soldiers who received the Medal of Honor for valor in the September 1864 Battle of New Market Heights in Henrico County.

Ms. Larson said the resolution should have gone through the regular process of consideration through council’s Land Use, Housing and Transportation Committee. The committee canceled its December meeting, leading Dr. Jones to move the resolution to the Organizational Development Committee for a vote ahead of the General Assembly session.

Ms. Larson pointed out that only a few people attended the meeting to address council on the issue, a sign she believes that few people were aware of its consideration.

Ms. Trammell agreed with constituents who texted her with messages such as “the city’s priorities are skewered ... wasting energy on superfluous ideas” and “there are many more high-priority and pressing issues than the monuments ... what we can simply do is just add monuments to those we have ... don’t erase history.”