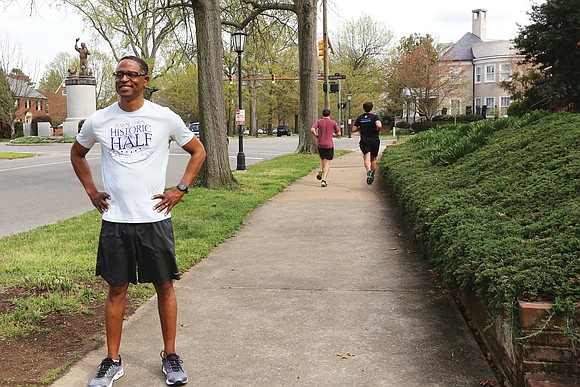 Participants: About 25,000 runners and walkers

Added attractions: This bold-letter Richmond event features numerous bands and spirit squads along the route, in addition to a popular “dress-up” division. Expect some runners to wear wacky, whimsical costumes.

If Brian Brown appears a bit on edge this week, it’s understandable.

He’s stretching his muscles and plotting strategy for what figures to be the footrace of his life — and certainly the most observed race in his 53 years.

The Mechanicsville resident was chosen at random as the “Dash for Cash” contestant for the Monument Avenue 10K this Saturday.

With the benefit of a 2-mile head start in the 6.2-mile endurance test, Brown can earn $2,500 by outrunning the pack of elite runners to the finish line.

Based on personal records, Brown would appear to be facing difficult odds. He’ll have to improve his previous times by some 30 seconds per mile.

But it’s “doable,” he modestly predicts. “I should feel extra wind at my back.”

Here are some reasons why he believes he can improve his per-minute clockings from eight minutes-plus, to a wee bit under eight.

Shorter distance: “I only have to run four miles instead of about six, so I don’t have to pace myself as much,” he noted.

A great cause: He will be running in honor of his sister-in-law, Julie Dickson Brown, who died of cancer in 2016. Should Brown fail to win, the VCU Massey Cancer Center receives the $2,500. If victorious, Brown vows to donate a portion of his windfall to the cancer center.

Less traffic: “Normally at the start you lose about a minute having to get through so many people,” he said. “This time, I’ll have the road to myself.”

He’ll have plenty of sideline company, however. Both sides of Monument Avenue will be lined with excited spectators.

Family affair: Brown hopes his son, Brandon, 17, and daughter, Chelsea, 14, will be running Saturday — both are registered — and that his nephew, Kaelan Brown, the son of his late sister-in-law, will be on hand to offer encouragement.

Also in attendance will be Brown’s wife, Angela “Nikki” Brown. “I’ve been doing this so long that she’s grown tired of it and doesn’t often come,” Brown said. “But this time, she’ll be there, near the finish line.”

Some background: Brown grew up in Alexandria and played varsity soccer for T.C. Williams High School and later in the University of Virginia’s intramural soccer program.

He was a college senior in 1984, the last time the Virginia Cavaliers went to the NCAA Basketball Tournament Final Four. Coincidentally, his beloved Wahoos competed in the Final Four last week for the first time since then.

A devoted hoops fan, Brown noted the “stars of the team” in 1984 included “Olden Polynice, Othell Wilson, Ricky Stokes and Jimmy Miller ... remember them?” he asked a reporter.

With basketball season having concluded with U.Va. winning the NCAA title Monday night. “The Professor” will exert all his mind and muscle power on negotiating Monument Avenue’s east and westbound lanes.

Although Brown has at least a decade-long history of road races, he knows this “Dash” challenge will be steep.

Last year, Brown ran the 10K in 50:36. The overall champ was Matt McDonald in 30:10. Times have slowed a bit since touring Kenyan and Ethiopian athletes scratched Richmond from their itinerary.

To start Saturday’s race, Brown will be so far in front it’ll look like a one-man act, even though the congested 10K start has been described as the scene from “The Ten Commandments” where Moses leads his people out of Egypt.

As the seconds and minutes pass, and as his sweat flows, knees quiver and lungs cry, Brown’s lead will continually dwindle as the younger, faster runners kick up their heels in relentless pursuit.

Eventually, Brown is apt to hear footsteps pounding the pavement behind him, becoming louder and louder. His ears may even catch the drift of heavy breathing from his fast-charging adversaries.

With the pressure on and crowd at full throat, can he hold them off?

At such stressful times, a runner might consider this famous quote by baseball icon Satchel Paige:

“Don’t look back. Something might be gaining on you.”