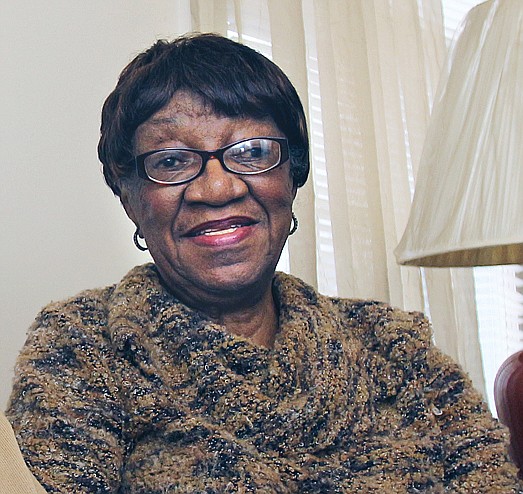 For decades, black women could only work behind the scenes at white-owned retail stores in Richmond during the harsh era of segregation.

In 1960, as sit-in protests mounted over whites-only lunch counters in Downtown and the Civil Rights Movement gained momentum, Raylass Department Store chose her to be the first African-American clerk to wait on customers on the floor.

Mrs. Lomax trained for the opportunity working for more than five years at a nearby African-American-owned boutique in Jackson Ward, where the owner took her under her wing.

In a public radio interview last year, she recalled the owner, a Mrs. James, saying, “I want to train you. So she went to work on me, and we talked about fashions and materials and colors, you know. She said, ‘If you are going into fashion, you’ve got to know about colors and what’s going to look good on you and somebody else.’ ”

Mrs. Lomax recalled shrugging off being called the “n” word as she began changing the complexion of the Raylass sales force. And then she moved on to other stores, including Lerner’s, LaVogue and Miller & Rhoads department store, one of the top stores at the time, where she also was the first African-American saleswoman.

As the result of her success, she paved the way for other African-American women to gain jobs as cashiers and sales staff.

But this was only part of the way this determined and fearless woman, who would go on to operate her own beauty salon, sought to bring change to Richmond.

For more than 40 years, she helped mold youth members of the Richmond Branch NAACP in serving as their volunteer adviser.

Da’Quan Marcell Love noted in a Facebook post that Mrs. Lomax “taught young people how to stand up for what’s right and become leaders in their communities. She insisted that we all know Robert’s Rules of Order and the Constitution for ourselves, never depending on anyone else for interpretation.”

Mrs. Lomax, a North Carolina native who spent her life keeping her promise to her father that she would fight racism and segregation, died Friday, April 19, 2019, at a Henrico County hospital from complications of a stroke. She was 86.

Her death comes just four months after that of her husband and foremost supporter, Richmond barber William Lomax, to whom she was married for 63 years.

Relatives and friends will celebrate her life at 11 a.m. Wednesday, May 1, at March Funeral Home, 2110 E. Laburnum Ave., followed by burial beside her husband in the Virginia Veterans Cemetery in Amelia County.

Mrs. Lomax, like many, migrated to Richmond from North Carolina to find new opportunities. Outside work, she sought to register voters and do what she could to advance the cause of the NAACP.

She was long involved in pushing people to become NAACP life members and courageous when it came to speaking out against what she perceived as injustice.

A few years ago, she led the fight to halt the Richmond Public Library Board from continuing to charge a $25 fee to community groups seeking to hold meetings in the Main Library.

She “paved the way for many Richmond youth leaders and inspired youths throughout the state when she served as the volunteer adviser, as well to the Virginia NAACP’s college and youth division.”

Umar Kenyatta recalled how she helped him and other students start a NAACP chapter at Virginia Commonwealth University and attend an independent political convention in Cincinnati.

Mrs. Lomax also was a founding member of the Richmond Chapter of Women in the NAACP.

Largely sidelined in recent years after her kidneys failed and she spent three days a week in dialysis, Mrs. Lomax was constantly on the phone with others in an effort to stay current.

In one of her last battles, she fought a dialysis center that she felt was mistreating patients. When the center tried to cut off service to her, she used her contacts to fight back, ultimately forcing the center to transfer her to another location that she said had better service.