VUU 1983 Lady Panthers, A.J. English to be inducted into CIAA Hall of Fame

Virginia Union University will be well represented in the upcoming 2020 John B. McLendon CIAA Hall of Fame Class.

The induction ceremony will be Feb. 28 at the Charlotte Convention Center in conjunction with the annual CIAA Basketball Tournament. 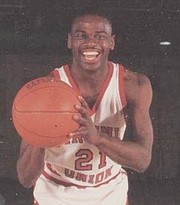 English led the NCAA Division II in scoring as a senior and accumulated 2,396 points under Coach Dave Robbins from 1986 to 1990.

Under Coach Lewis Hearn, the 1983 Lady Panthers posted a 27-2 mark en route to the national title in Springfield, Mass.

Paris McWhirter and Barvenia Wooten were both named to the All-Tournament Team, with McWhirter receiving MVP honors.

The CIAA Hall of Fame draws its name from the late John B. McLendon, a former coach at North Carolina Central (then North Carolina College) and Hampton University (then Hampton Institute) and founding father of the CIAA Basketball Tournament in 1946.