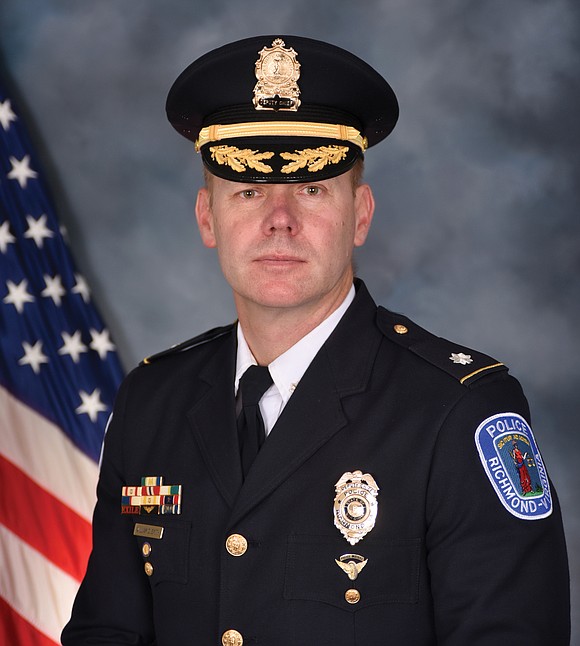 For now, William C. Smith is in charge of the Richmond Police Department.

Before he left last week, Chief Durham made it clear that he wanted Chief Smith to at least temporarily succeed him during the search for a successor.

The outgoing chief gained confidence in Chief Smith during the two years he served as the department’s chief of staff and Chief Durham’s right-hand man.

Ahead of Chief Smith’s appointment, Chief Durham promoted the 50-year-old Richmonder to deputy chief, named him to serve as acting chief in his absence and recommended to his civilian superiors at City Hall that Chief Smith serve as interim chief until a permanent replacement was appointed.

“Chief Smith is an experienced law enforcement professional who brings a sense of duty and an analytical approach to his work,” the mayor stated in the announcement.

“He understands the unique demands and responsibilities of this important job, and I have confidence in his ability to manage the department during the transition period.”

Chief Smith said he is grateful to the mayor and Chief Administrative Officer Selena Cuffee-Glenn, who made the appointment, “for this opportunity to lead. I look forward to continuing the important work of the department as a community policing organization.”

He indicated that he would compete for the permanent job.

If Mayor Stoney follows past precedent, he and Ms. Cuffee-Glenn would name a citizen committee to lead the search and create a short list from which the new chief would be selected. That could take three to six months.

Chief Smith joined the department in 1995 and rose relatively quickly from policing the streets into management.

Since 2007, he has supervised emergency communications, commanded the Third Precinct in the West End, run the department’s business services and supervised special operations, which covers everything from SWAT and hostage negotiations to traffic investigations, horse and K-9 units and event services for the Christmas Parade, the Richmond Marathon and other festivals and activities.

He earned his bachelor’s degree from Virginia Commonwealth University and also is a graduate of the University of Richmond’s Police Executive Leadership School and the Police Executive Research Forum’s Senior Management Institute for Police in Boston.