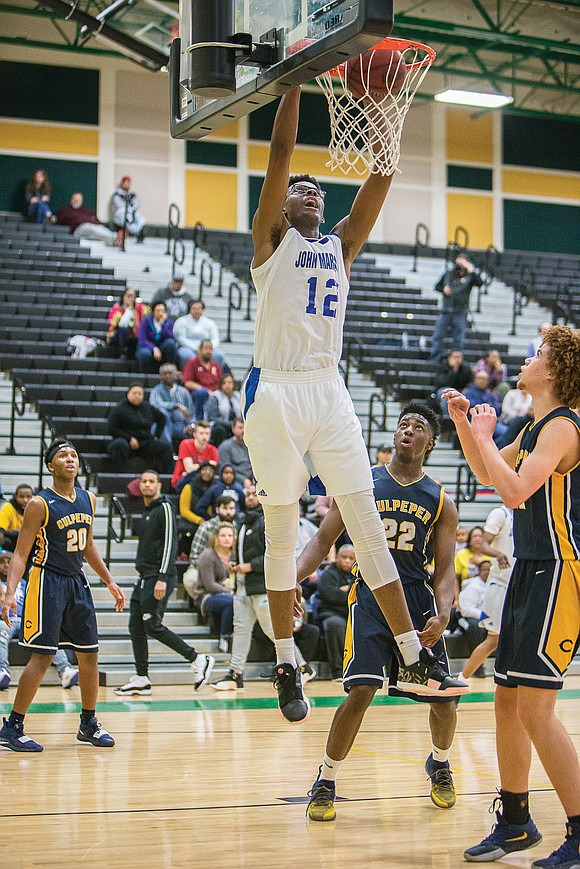 In its quest for a second straight state basketball title, Richmond’s John Marshall High School has switched from a No. 1 single star to a galaxy of shining lights.

“Aubrey’s a leader, selfless and tough as nails,” Coach White said after the team’s 100-62 rout of Culpeper County High School in the Feb. 22 Class 3, Region B final held in Richmond at Huguenot High School.

Merritt is one of four senior standouts returning from last year’s 3A State title run.

Rather than list his position as guard, forward or center, Merritt is more of a hybrid. His per-game averages of 12 points and six assists don’t reveal the full extent of his capabilities.

John Marshall won last year’s title with marquee attraction Isaiah Todd, who was rated among the top players in the nation in the Class of 2020. Todd has since transferred to Trinity Academy in Raleigh, N.C.

Without Todd, the Justices haven’t lost their pole position in the State 3A’s fast lane. If anything, the blue and white clad team from North Side might have even shifted up a gear.

“We lost one star, so we all go harder on offense and defense,” Merritt said. “The goal is the same — the state championship, absolutely.”

For now, Merritt is leaning toward taking his cross-over dribble to Life University in Marietta, Ga., but he’s keeping his options open. He figures to continue to impress as John Marshall edges closer to another state crown.

If basketball was a game of poker, Coach White would be holding a fistful of aces. Here are the first six in minutes logged:

Merritt: Splits ball-handling duty with Levar Allen. He is a threat from a distance and relentless in pressure defense.

Jairus Ashlock (6-foot-4, senior): Another all-round performer, he excels in the open floor and attacks the rim with vengeance.

Levar Allen (6-foot-1, senior): This four-year starter runs the show. He is surprisingly quick and nimble at 227 pounds.

Elijah Seward (6-foot-0, junior): An excellent shooter and jumper. He wowed the crowd with a two-handed, alley-oop slam against Culpeper.

Roosevelt Wheeler (6-foot-10, sophomore): Known as the “human eraser” for his shot-blocking skills. He had eight blocks against Culpeper.

Add to that a group of bench players who’d be starters on many other 3A squads. Also, John Marshall had a strong junior varsity season with eighth-grader Te’Quan Allen, Levar Allen’s brother, an exciting up-and-comer.

For the second straight year, the Justices have continued gathering momentum throughout season.

Based on enrollment, the VHSL went from a three-division alignment (AAA, AA, A) to six divisions (labeled 1 through 6) in 2014.

John Marshall High School’s next opponent is among the most decorated programs in state history — the I.C. Norcom High School Greyhounds from Portsmouth.

It’s a rematch of sorts, with John Marshall the clear favorite. The Justices defeated Norcom 79-52 on Dec. 8 at the Ashe Center. Norcom lost to Phoebus High School of Hampton 79-57 in its regional final on Feb. 22.

Norcom (13-12) is having a down season by its high standards, but its past achievements are all over the VHSL record book.

Any talk of Norcom hoops would be remiss without reference to Johnny Morris. On Feb. 22, 1961, Morris scored 127 points by himself in a victory over Mary Smith High of the Eastern Shore. At the time, both schools were in the Virginia Interscholastic Association.

Morris’ mark is considered the all-time state individual record for VIA and VHSL schools combined. 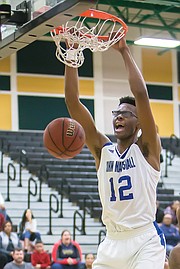