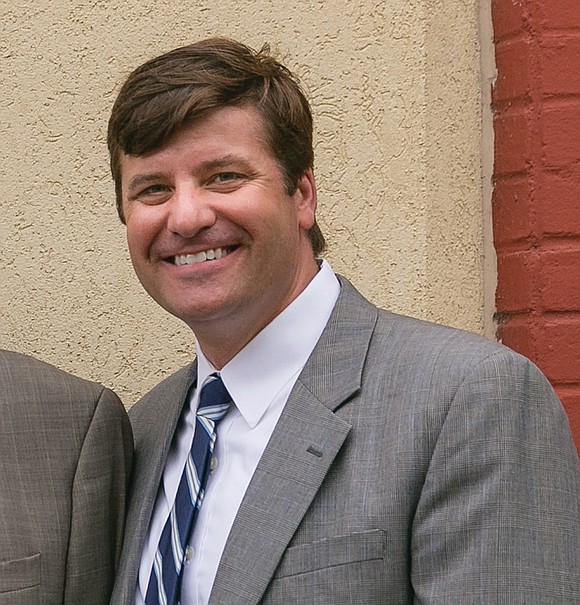 The legal fight to remove 5th District City Councilman Parker C. Agelasto from office as the result of his move to the 1st District last year is gaining new energy.

Former City Councilman Sa’ad El-Amin told the Free Press that he is on the verge of filing a request with the Richmond Circuit Court to remove Mr. Agelasto from office because he no longer lives in the district he was elected to represent.

Mr. El-Amin, who served five years on council from 1998 to 2003 and now operates a legal consulting firm, said he is waiting until he meets on Friday with Commonwealth’s Attorney Michael N. Herring.

“I’m ready to file,” Mr. El-Amin said Tuesday, adding that he put his filing on hold after Mr. Herring invited him to discuss the matter.

Mr. El-Amin said he is still hoping that Mr. Herring will agree to file the action as he is empowered to do.

In a letter dated Feb. 13, Mr. El-Amin urged Mr. Herring to ask the Richmond Circuit Court to issue a “writ of quo warranto” that would find Mr. Agelasto’s continued service on City Council represents a violation of the state law that requires every state and local elected official to live and be eligible to vote in the district he or she serves.

Mr. Herring acknowledged that Mr. El-Amin provided an accurate summary of the law and provided a legal basis for seeking a writ. But Mr. Herring so far has pledged only to “consult with appropriate parties” and to “take the time I need to reach a well-reasoned decision on any action by my office.”

Under a little known provision of state law, the attorney general, the commonwealth’s attorney or “any interested person” can ask a circuit court to issue a write of quo warranto “against a person for the misuse or nonuse of any privilege conferred upon him by law” or “against any person who intrudes into or usurps any public office.”

Council President Cynthia I. Newbille said Monday night she has no plans to schedule a meeting with council colleagues to discuss the letter and that other members of the council have not requested such a meeting. That in large measure is because of the advice of City Attorney Allen L. Jackson.

In response to Mr. El-Amin’s letter, Mr. Jackson wrote a memo to City Council in which he described Mr. El-Amin’s letter as identifying “the correct legal process for challenging the right of an elected official to hold office,” but also advised the council not to get involved.

Mr. Jackson stated that he believes that the City Charter only empowers the council to remove a member for committing a crime or “malfeasance in office or neglect of duty, neither of which can properly be said to be present in this situation.” In his view, the issue of Mr. Agelasto’s residence can only be decided by a “judge or jury in a proceeding brought in Circuit Court” under the writ of quo warranto procedure.

However, Mr. Jackson did not address Mr. El-Amin’s point that the city attorney never mentioned to City Council members that the writ of quo warranto existed or advised the governing body that it could request Mr. Herring use it.

Separately, former 5th District City Councilman Henry W. “Chuck” Richardson, who served on the council from 1977 to 1995 and who still lives in the district, is renewing his legal challenge to Mr. Agelasto.

In January, Mr. Richardson had acted as his own lawyer in filing a request for the Richmond Circuit Court to issue a declaratory judgment finding that the 5th District seat is vacant because of Mr. Agelasto’s move from Floyd Avenue in the district to a home he and his wife purchased last summer in the 4200 block of West Franklin Street that is in the 1st District.

On behalf of Mr. Richardson, Mr. Prince filed a new request dated Feb. 14 for the Richmond Circuit Court to issue a declaratory judgment that the 5th District seat is empty because of Mr. Agelasto’s failure to adhere to the state residency law.

Despite receiving high marks for his work on the council and on behalf of constituents, Mr. Agelesto has galled supporters like Mr. Richardson who believe that Mr. Agelasto’s presence on the council after moving to another district undermines the progress of past decades.

Both Mr. Richardson and Mr. El-Amin have cited the extended legal battle in the 1970s that ushered in the city’s nine district system of representation and majority African-American control of City Council and of City Hall. As a result, Richmond’s first African-American mayor, Henry L. Marsh III, was elected in 1977.

For them, Mr. Agelasto’s continued service on council while not living in the district represents the first step to a return to the system of at-large voting that allowed wealthy white men from the 1st District to dominate and control city government prior to the legal challenge.

Mr. Agelasto, who has said he will not seek re-election to a third term in 2020, has hired an attorney, former Virginia Attorney General Anthony Troy, to deal with the legal fallout from his move.

Mr. Agelasto, who has issued a blanket “no comment” to questions about his residence, earlier said that he still owns his former home in the 5th District. He continues to maintain his voter registration at that former address, city records show, even though he has rented the home to others since he and his family moved.

Mr. El-Amin and Mr. Richardson have been combing state laws after the eight other members of City Council declined to get involved on the advice of the city attorney.

Mr. Agelasto appeared likely to survive on council after his colleagues declined to move against him and after Kirk Showalter, the city’s voter registrar, advised that state and federal voting laws bar her from taking any action to determine if Mr. Agelasto’s residency for voting purposes is valid.

She said she could only investigate or hold a hearing on a voter’s registration in a case that involved a move out of the city, unlike Mr. Agelasto’s situation that involves a move from one precinct to another within Richmond.

That outcome ensured that Mr. Agelasto remains a registered voter in the 5th District, which he is required to be to serve on council.