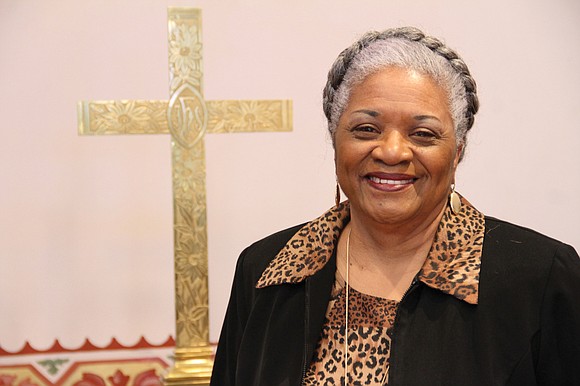 After a 15-year relationship with Richmond Hill, the Rev. Janie M. Walker, co-pastoral director of the religious community on Church Hill, is retiring.

Rev. Walker, whose last day is May 15, has led the residential ecumenical Christian community since 2014.

Richmond Hill is situated in the former Monte Maria monastery overlooking the city on a quiet spot at the end of West Grace and 22nd streets that includes a chapel, gardens, a labyrinth and library that are open to visitors Tuesday through Saturday.

Its mission is to seek God’s healing of Metro Richmond through prayer, hospitality, racial reconciliation and spiritual development. They offer a variety of programs, classes and ministries to the public, including community worship services followed by meals, personal and group retreats, grief support, art and spirituality retreats and an Urban Service Corps in which about a dozen people commit to living at Richmond Hill while working and providing outreach services to the Richmond community.

Over the course of 30 years, the Sandston native has worked in several different areas of ministry, including as founder and former pastor of Resurrection Life Fellowship in South Richmond, community development, pastoral care and prayer and counseling.

Her spiritual desire, she said, has been to see healing and wholeness in people and religious institutions.

Rev. Walker’s initial interest was in mathematics, which was nurtured and supported at Virginia Randolph High School in Henrico County. She continued at Virginia State University where she studied math for a year and then started working as an accounts payable supervisor at Philip Morris.

She earned an associate degree in biblical studies from the Central Virginia School of Ministry in 1993, and later a master’s in divinity from the Samuel DeWitt Proctor School of Theology at Virginia Union University in 2007.

In between, she graduated from the RUAH School of Spiritual Guidance in Richmond in 2002, serving on its faculty beginning in 2003 and then becoming dean of the school from 2014 to 2017.

Rev. Walker said her reason for going into the ministry was quite simple. “It was purely a calling. I was just compelled in my heart to be of service to people in a different way and to help them grow into who they are as people of God.”

In 1999 after working for the Presbytery of the James, the regional governing body for the Presbyterian Church USA, Rev. Walker wrote a personal mission and vision statement that she said very clearly defined her path — to continue to work in the faith community.

“I wanted to explore my spiritual journey with more depth, as well as to help other people explore theirs. The key thing was racial reconciliation,” Rev. Walker said.

But just being there wasn’t enough. She said she realized she needed to take action on racial injustices and toward racial healing and reconciliation.

“I began to see it as a calling,” Rev. Walker said.

Rev. Walker first came to Richmond Hill in 2004 while considering taking a staff position. “I looked at their mission and said, ‘Oh my God, this is the same as mine.’ It was a match that I couldn’t let go of.”

She was hired as the administrative assistant to the Rev. Ben Campbell, founder and the first pastoral director of Richmond Hill. As the residential community is structured, they share responsibility for the facility as well as the ministry.

Rev. Walker has served in almost all of Richmond Hill’s professional capacities, including as hospitality coordinator, program director and associate pastor for individual ministries. When Rev. Campbell retired in 2014 after more than 28 years, Rev. Walker was appointed to replace him as co-pastoral director.

At the time, Richmond Hill determined its leadership should reflect the commitment to racial reconciliation and decided on co-directors — an African-American woman and a Caucasian man — to represent the diversity of the community.

“I think for this period of time, I was being called to hold this place together in a way that would provide continuity and maintain some stability during a transition,” Rev. Walker said.

“Rev. Campbell was a pretty large figure in the community, a strong administrator and leader, and people were concerned that Richmond Hill would fall apart without his leadership,” she said.

Racial reconciliation, she said, remains a top issue in the city and in Virginia.

“That’s not where it stops. The question then is, “Who am I with the next human being? Who am I called to be as a human being?

“Ultimately, racial reconciliation would look like all of us being together as authentic human beings, regardless of race or gender or anything else. There should be love, respect and compassion for one another.”

In retirement, Rev. Walker plans to relocate to New Orleans in time for the birth of her first great-grandchild.

“There is different level of joy about being a great-grandparent that’s so satisfying,” she said. “I really see my role as guidance and as being a presence with this great-grandchild as I walk with her through life sharing her early years.”

As Rev. Walker prepares to go, she wants Richmond and Virginia residents to “just do it” and lead the nation in racial reconciliation and making systemic change.

“We can make changes on an individual basis,” she said. “But if the changes we are making are not impacting the laws or strategies that are keeping people in certain socioeconomic places, then we are going to continue to make the same mistakes over and over again.”