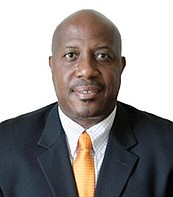 The Trojans basketball coach has received the Clarence “Big House” Gaines Coach of the Year Award by the National Sports Media Association. The award is presented to the most outstanding men’s basketball coach in NCAA Division II.

Coach Blow will be honored June 24 at Lawrence Joel Veterans Memorial Coliseum in Winston-Salem, N.C. This is the 60th year in which the presentation has been made.

The Division I winner is the University of Houston’s Kelvin Sampson.

Coach Blow guided the Trojans to a 28-5 mark this past season and a CIAA Tournament championship. VSU was later eliminated in the second round of the NCAA Division II playoffs.

In six seasons at VSU, Coach Blow is 131-43, with two tournament crowns in 2016 and 2019. He also won top CIAA honors in 2010 during his coaching stint at St. Augustine’s University in North Carolina.

Earlier this year, the Norfolk native was named Atlantic Region co-coach of the year.