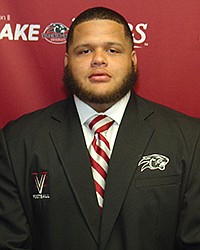 Virginia Union University’s Shamdu Nalls has signed a free agent contract to try out for the NFL’s Buffalo Bills.

The 6-foot-4, 330-pound offensive lineman from Baltimore will report to an offseason training session on May 19.

Nalls was a two-time, All-CIAA performer. This past season, his blocking helped the VUU Panthers to 45 points per game and 253 yards rushing.

VUU has a history of sending offensive linemen to the NFL. Cornelius Johnson played with the Baltimore Colts from 1967 to 1973, and Herb Scott played with the Dallas Cowboys from 1975 to 1984.