Retired Richmond Circuit Court Judge Melvin R. Hughes Jr. Wednesday ruled that the City of Richmond violated the Freedom of Information Act in failing to release more than 2,600 documents related to a still-secret deal to replace the Richmond Coliseum.

Judge Hughes, who was sitting in for Judge Bradley Cavedo, ordered the release of the documents after finding the city wrongly tried to impose a huge charge on a private citizen for the paperwork that it previously had released to a Richmond newspaper for a far smaller cost.

The judge also found the city was withholding other documents related to the Coliseum deal without proof that their release would affect negotiations as the city asserted. 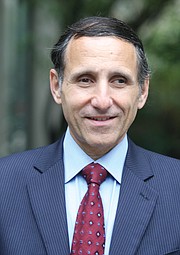 Judge Hughes’ decision represented a victory for Paul Goldman, leader of the Put Schools First campaign to modernize city schools. Mr. Goldman brought the suit after the city tried to block him from obtaining or reviewing the documents.

“The city presented no evidence and instead thumbed its nose at the judiciary,” Mr. Goldman said after the nearly two-hour hearing. “They had to prove by a preponderance of the evidence that they had a right to withhold the documents. Instead, they tried to argue that the government is entitled to do what it wants.”

In his suit, Mr. Goldman challenged City Hall’s requirement that he pay $2,018.20 in advance to see 2,643 pages of documents related to the Coliseum deal that the city provided last year to the Richmond Times-Dispatch for $269.

The documents, which include email exchanges between attorneys for the city and the potential developer, undergirded a story that Times-Dispatch reporter Mark Robinson wrote about the development plan presented to the city by a private group, Navy Hill District. The story was published July 7, 2018, and became the basis for a supportive editorial in the paper advocating for the Coliseum replacement plan.

Mr. Goldman said he argued that the city could not offer “a friends and family” discount to those who are supportive and charge a far higher price when someone else who might be critical requests the same documents.

The city told Mr. Goldman that the $2,018.20 included $80 for copies and $1,938.20 to cover the cost of having a staff member review the documents to determine if some were too sensitive to be released. The city did not impose a similar review charge on the daily newspaper, city records show.

Judge Hughes found that the city wrongly blocked Mr. Goldman from receiving information about the corporate structure of Navy Hill District that Navy Hill had provided as part of its bid for the project.