Agelasto wraps up City Council service with a look back 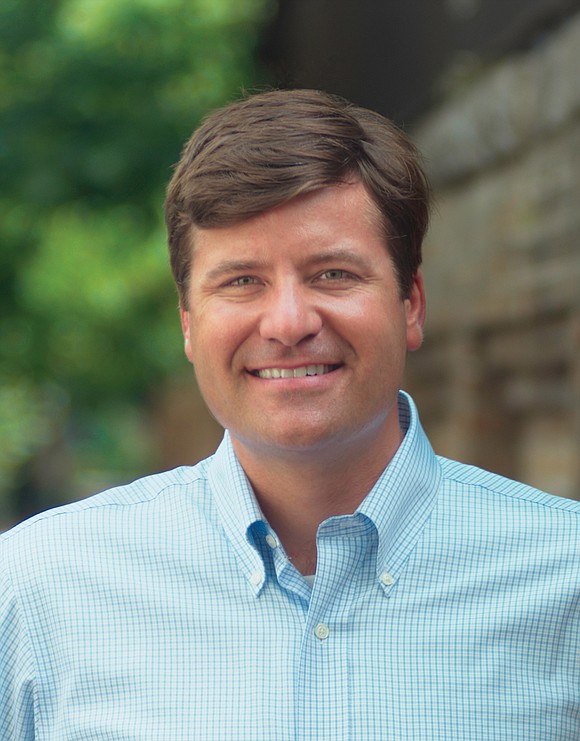 City Councilman Parker C. Agelasto, 43, wrapped up his final week and walked away before Thanksgiving from City Hall and his post as the 5th District City Council representative.

Forced to resign 13 months before his second term ends because he moved out of the district, he believes he has helped create progress for the district and the city.

His successor, Councilwoman-elect Stephanie Lynch, will be sworn in on Monday, Dec. 2.

Mr. Agelasto is now focused on his family and on conservation as executive director of the Capital Region Land Conservancy.

In an interview with the Free Press, he said he is leaving office believing that he made a difference in the diverse district that stretches from Oregon Hill to Carytown and from Byrd Park to Swansboro in South Side.

Since his first election to represent the district in 2012, Mr. Agelasto said he pushed to ensure that 5th District civic groups got a chance to review any development applications that went to City Hall.

With at least 14 civic associations, “we have one of the most active groups of citizens in the city,” he said.

During his seven-year tenure, he said his goal was to make sure that members of the civic groups would be aware of proposals and had an opportunity to offer their views, rather than being surprised after work had begun. He said that effort enabled residents near City Stadium to oppose a city effort to sell the property for redevelopment and ensured community views were taken into account as GRTC and the city pursued the sale of the bus company’s former headquarters in The Fan.

Mr. Agelasto said that he sought to spruce up the district by holding monthly community cleanups that rotated to every neighborhood. The cleanups, along with the city’s introduction of regular bimonthly pick- ups in alleys, have successfully reduced uncollected trash that previously was a source of aggravation, he said. He believes that such regular cleanups have become institutionalized and will continue with Ms. Lynch on City Council.

Even better, he sees the reduction in problem areas as helping the district evolve from “bulk and brush collection from alleys and general litter pickup to focusing on beautifying neighborhoods through the planting of trees and covering graffiti.”

He also is proud of his work with residents on crime reduction at the once notorious Midlothian Village complex, which new owners have renovated and have renamed The Belt Atlantic.

“I’m glad the new owners are keeping their promises,” he said. “People deserve to live in a safe place.”

He remains disappointed, though, that he could not get his colleagues on City Council to support his proposal for city inspection of vacant rental apartments and homes to ensure they meet minimum standards and reduce the amount of problems new tenants would face.

“I think it would have helped ensure decent housing,” he said.

During his council tenure, he is listed as the patron or co-patron of about 167 pieces of legislation since 2014 and helped to gain historic designation for The Carillon, Byrd Park and Byrd Park Court.