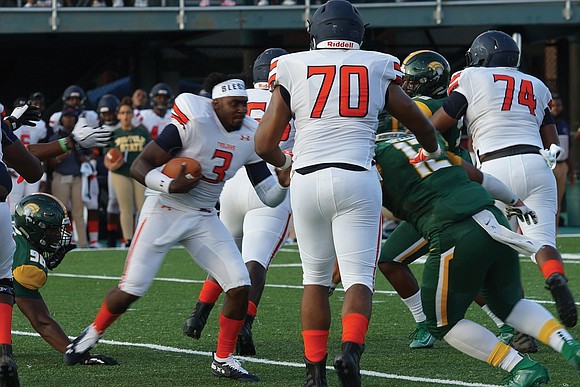 Turnovers taste great fresh off the griddle, but can cause indigestion on the gridiron.

Virginia State University is 0-1 largely because of its inability to hang on to the football.

A whopping six turnovers—four lost fumbles and two interceptions—led to the VSU Trojans’ 44-21 loss before a crowd of 15,538 people last Saturday at Norfolk State University.

Twice, the Trojans lost a handle on the ball inside the NSU 5-yard line. VSU left Dick Price Stadium with a huge “What if?” on its mind.

Some might suggest VSU’s biggest enemy was wearing orange and blue compared to the opponent wearing green and gold.

Cleaning up the spilled turnovers will be a primary mission as the Trojans play host to the University of North Carolina-Pembroke at 6 p.m. Saturday, Sept. 14, in Ettrick.

Aside from the turnovers, VSU Coach Reg- gie Barlow’s NCAA Division II squad was impressive against NSU of the next-level-up FCS. An upset was in the making except for the miscues. VSU outgained the NSU Spartans 502 yards to 430 yards and had 25 first downs to the home team’s 20.

Transfers came up big for the Trojans.

K’Jon Coley, a Benedictine graduate who transferred to VSU from the University of Virginia at Wise, led the defense with nine tackles.

NSU quarterback Juwan Carter, a junior from Highland Springs, threw for four touchdowns and 203 yards as the Spartans improved to 1-1.

VSU’s next opponent, UNC-Pembroke, opened in 1887 as a school for mostly Lumbee and Cherokee students from Robeson County, N.C. The team’s nickname is the Braves. It is the alma mater of Kelvin Sampson, the current basketball coach at the University of Houston and former coach at Oklahoma and Indiana.