Virginians of all walks of life have been impacted by thecoronavirus,theairbornerespiratoryillnessthathas stricken more than 3,600 people in the Commonwealth and resulted in 75 deaths as of Wednesday.

Their passing impacts their families and the larger communities in which they worked, volunteered, worshipped and lived.

Here are some of their stories.

For Richmond native Phillip DeBerry, taking command of the highways with a sense of skill and patience was a way of living for nearly half a century.

Mr. DeBerry had been a Greyhound bus driver since 1975, delivering thousands of passengers to destinations along the East Coast from New York City to the Carolinas and countless points in between. He never had a wreck, a negative encounter with a passenger or got a traffic ticket, said Shelia Abernathy, his companion for 45 years until his death on March 28 from the coronavirus.

“He never met a stranger,” Ms. Abernathy said. He was known to go the extra step when needed, without being asked.

On more than one occasion, she said, he would have on the bus a young mother with a child or two, with one or both of the children crying from apparent hunger. At a stop, he would offer the family food paid for out of his pocket to settle their stomachs and make the bus ride more endurable. That was his style, his character, she said.

Mr. DeBerry, who was 72, was an alumnus of Armstrong High School. He got his start driving in the early years of integrated interstate bus travel. In the 1960s and before, Greyhound and Trailways did not hire racial minorities as drivers and enforced rigid racially segregated seating on the buses, in bus stations and their dining areas and restrooms.

By the time Mr. DeBerry came of age, racial discrimination practices had been outlawed and African-Americans and other minorities across the South were being recruited and hired as drivers. As he honed his skills as a driver of the huge 45-passenger Greyhounds, he was offered a job on the company’s driver training staff.

The opportunity was offered by Paul Wright, a fellow Richmonder who had been a Greyhound driver longer and had been promoted to manager and supervisor of Greyhound’s driver instruction program, Ms. Abernathy said.

Mr. Wright, who had gone with Mr. DeBerry for a training class in New Jersey, also died of the coronavirus.

Ms. Abernathy recalled a trip to Las Vegas the couple made. They happened to be there at the same time as singer James Brown, one of Mr. DeBerry’s favorite entertainers.

“He managed to get tickets to see James Brown,” making the whole excursion worth it, she said.

“He loved music, loved travel, loved casinos and loved life,” she said. “He was too young,” she said, adding that his passing “came too soon.”

In addition to Ms. Abernathy, Mr. DeBerry is survived by two sons, Phillip and Daryl.

A memorial service is being planned for a date to be determined later. 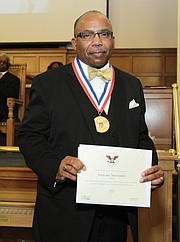