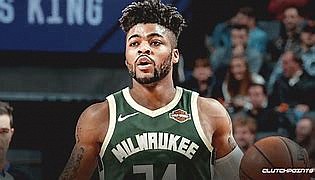 If nothing else, Frank Mason III may have made the Milwaukee Bucks’ unofficial “All Bubble” team.

The former Petersburg High School and University of Kansas phenom raised eyebrows in a limited opportunity with the Bucks. Competing in “The Bubble” at the ESPN Wide World of Sports in Orlando, the 5-foot- 11, 190-pound Mason posted three double-digit outings as the Bucks closed the regular season with the NBA’s top record of 56-17.

While the Bucks — choosing to rest several veterans — went just 3-5 in “The Bubble,” Mason shined there following a call-up from the G-League Wisconsin Herd.

On Aug. 4, he had 11 points, two rebounds and four assists during the Bucks’ game against the New York Nets. Aug. 11, he had 19 points, five re- bounds and six assists against the Washington Wizards.

And in the Bucks’ final regular season outing on Aug. 13, Mason contributed 18 points, four rebounds and eight assists against the Memphis Grizzlies.

“With us missing Bled (Eric Bledsoe), it was my opportunity to get out there and impress coach. My job is to be a leader and try and make the team better,” Mason said on the Bucks’ Twitter account. “I do whatever I can to bring some energy.”

“We think Frank is somebody who can step up and provide quality minutes for us,” Milwaukee Coach Mike Budenholzer said on the Bucks’ Twitter. “And what he did in the G-League, that’s special.”

Mason’s career took a serious setback last year after he was released following two seasons with the Sacramento Kings.

In need of a job, he signed a “two-way contract” with Milwaukee, which meant he could play for the Bucks and their G-League affiliate in Oshkosh, Wis.

Mason proceeded to tear up the G-League, averaging 26.4 points, pacing the team to a 33-10 record and being named league MVP in a season cut short by the pandemic.

He had played only six games in a deep reserve capacity with the parent Bucks before getting a more serious look in “The Bubble.”

Despite the fast finish, there are no guarantees for Mason regarding the Bucks’ playoff roster. He was on the roster Tuesday for the Bucks’ opening playoff game against the Orlando Magic. He played only in the final minute of the game, adding one assist in the team’s 122-110 loss to the Magic.

The Bucks’ other “two-way player,” Cam Reynolds was not called up from the Herd.

Mason, who was the NCAA National Player of the Year as a senior at the University of Kansas, could be activated at any time for what figures to be a long playoff run by the Bucks.

At worse, he has made a statement that is likely to enhance his chances of being kept by the Bucks — or ac- quired by another team — for 2020-21.

It stands to reason the best player in the G-League is capable of finding a more permanent home on some NBA roster.

The NBA best-of-seven matchups are being held inside “The Bubble” at the ESPN Wide World of Sports Complex at Walt Disney World in Florida.

Matchups for the first round series