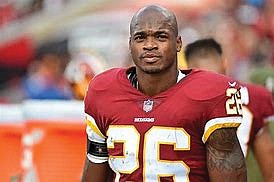 How far the Washington professional football team goes this NFL season could depend on how much Adrian Peterson has left in his tank.

Peterson contends — and there is evidence to support his claim – that he’s not close to empty, even at the advanced age of 35, by NFL running back standards.

In fact, the former Oklahoma All-American has a shot—albeit a long shot— at Emmitt Smith’s career mark of 18,355 yards.

Washington opens at home Sunday, Sept. 13, with a 1 p.m. kickoff against the Philadelphia Eagles.

The 6-foot-2, 220-pound Peterson ranks with the greatest to ever wear shoulder pads. There is no expiration date on “AP’s” back and no whispers of retirement.

“Why not four more years?” he said regarding his gridiron longevity. “Who knows? Depends on how my body holds up.”

In his last two seasons with Washington, Peterson has rushed for 1,940 yards with a 4.3 per-carry average. That’s not too far off his career norm of 4.7.

More realistically, he has a solid shot at passing Walter Payton (16,726 yards) as the all-time runner-up to Smith.

Quarterbacks and kickers tend to have the longest NFL careers. Running backs take a brutal beating and generally retire in their late 20s.

The durable Peterson also is challenging Marcus Allen as the NFL’s oldest career running back in the modern era. Allen was 37 when he retired from the Kansas City Chiefs in 1997.

Peterson ran for 2,097 yards in 2012, earning MVP honors. He also holds the NFL record for most rushing yards in a game, 296, as a rookie with the Minnesota Vikings in 2007 against San Diego.

In Coach Jay Gruden’s farewell season in 2019, Washington went 3-13, which is not conducive to high rushing totals. When teams are trailing throughout games, the ground attack is generally abandoned in favor of an aerial attack.

In his 14th season, Peterson is the clear No. 1 running option for Washington now that highly touted, but oft-injured Derrius Guice has been released because of off-field alleged offenses. That leaves Bryce Love and Antonio Gibson as the other candidates for carries.

Love, 23, is a former Stanford University standout who missed most of last season with a knee injury. Gibson, 22, is a promising rookie out of Memphis.

In addition to his rushing yards, Peterson is fourth on NFL’s all-time list for rushing touchdowns with 111. He trails only Emmitt Smith (164), LaDainian Tomlinson (145) and Marcus Allen (123).

It’s not all about individual accolades, however, for the veteran superstar. Something missing from his Hall of Fame career is an appearance in the Super Bowl.

“Winning a championship is the one I want most,” Peterson said.