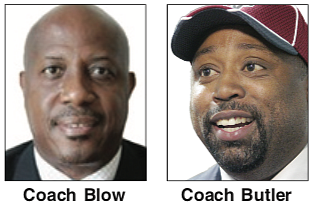 Virginia Union University has arrived at the 75th Annual CIAA Tournament with a full head of steam. Meanwhile, Virginia State University stubbed its toe during the final preparations for the tournament in Charlotte, N.C.

VUU defeated VSU 83-78 during last Saturday’s regular season finale at a filled-to-the-rafters Barco-Stevens Hall, aka “The Sardine Can,” where the VUU Panthers were 13-1 this season. The Panthers go into the tournament with a seven game winning streak.

VSU Coach Lonnie Blow’s Trojans are eyeing a third tournament crown in the last four years. Prior to the team’s recent success, VSU’s only CIAA titles were in 1988 and 1947.

VUU last won the CIAA crown in 2018 under Coach Jay Butler. The Panthers also claimed the title 12 times between 1979 and 2006 under former Coach Dave Robbins.

Then there are the “Bounce Brothers,” 6-foot-6 VUU forwards Jordan Peebles and Raemaad Wright.

In defeating VSU, Peebles had 15 points and 12 rebounds, while Wright had 12 points, 10 rebounds and four blocked shots. Together, the “Bounce Brothers” have blocked 72 shots.

VSU has no clear-cut star, but that doesn’t mean the squad doesn’t shine on attack. The Trojans, who seem to take turns as individual top gun, lead the CIAA in scoring average, 81.4 points. 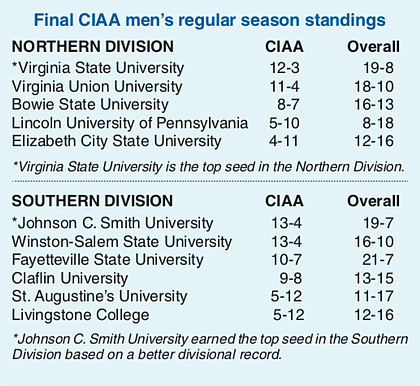 Farewell North Carolina: The CIAA Tournament has been in Charlotte, N.C., since 2006. Next year, the event is moving to Baltimore.

Host Johnson C. Smith University won the 2008 and 2009 CIAA titles but hasn’t made much noise since. The Golden Bulls, with the strongest crowd backing, may be primed for an overdue crown this year under Coach Steve Joyner Sr., who is among the longest tenured HBCU coaches.

This is Coach Joyner’s 28th season as the Golden Bulls’ head coach and before that, he coached the Johnson C. Smith women’s teams.

Richmonders may recall Coach Joyner as the assistant at VUU in the 1970s under Coach Robert Moore.

While Caucasian stars have been rare in the CIAA Tournament, Coach Joyner potentially has one in 6-foot-6 Serbian native Nenad Milenkovic. A transfer from the University of South Carolina-Aiken, Milenkovic scored 36 points on Jan. 25 against VUU, nailing six 3-pointers. Not a man you want to foul, he has hit 87 percent of his free throws.

The event has come a long way over 75 years. The inaugural tournament operated on a $500 budget.

The Charlotte Regional Visitors Author- ity estimated the 2019 tournament drew about 150,000 people attending games and other activities, having a $50 million economic impact.

Looking ahead: The CIAA champion earns an automatic bid to the NCAA Division II Atlantic Regional playoffs. According to the latest poll before VSU’s loss to VUU, the Trojans were sixth in the regional poll but unranked nationally.

There are no guarantees an additional CIAA team will be extended a bid to the NCAA playoffs, placing pressure on the outcome of the CIAA Tournament.