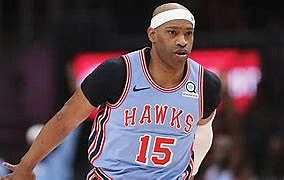 Vince Carter, among the most dynamic and durable players in NBA history, has announced his retirement.

Earning the nickname “Vinsanity,” Carter is retiring following a record 22-season NBA career. Carter played the past two seasons with the Atlanta Hawks.

“I’m officially done playing professional basketball,” the 43-year-old Carter said in a podcast hosted by TheRinger and the Atlanta Hawks. “I’ll play at home (instead).”

The eight-time All-Star out of the University of North Carolina got off to a sensational start with the Toronto Raptors in 1998-99, winning Rookie of the Year and giving a jaw-dropping performance in the All-Star Slam Dunk Contest that hasn’t been forgotten.

Carter’s victorious array of slams in 2000 featured a 360-degree windmill, a between-the-legs bounce dunk and an elbow in the rim dunk, known as the “cookie jar.”

The 6-foot-6 Florida native was as dangerous behind the 3-point arc as he was throwing them down above the cylinder.

With 2,290 career 3-point connections, Carter is sixth on the all-time list behind Ray Allen, Reggie Miller, Steph Curry, Kyle Korver and James Harden. Carter’s 22 NBA seasons is the most in league history. He thrilled fans playing during the course of his career for the Toronto Raptors, the New York Nets, the Orlando Magic, the Phoenix Suns, the Dallas Mavericks, the Memphis Grizzlies and the Sacramento Kings before wrapping up with the Hawks.

At 43, he is the fourth oldest player to ever compete on the highest level in basketball behind Nat Hickey, Kevin Willis and Robert Parish.

In both his sophomore and junior seasons at UNC, he helped the Tar Heels to the NCAA Final Four. He left Carolina one year early in 1998 to enter the NBA draft. He was drafted fifth overall in 1998 by the Golden State Warriors and then immediately traded to Toronto.

In 2000, Carter played on the United States’ Olympic gold medal-winning bas- ketball team at the Summer Olympics in Sydney, Australia.

His final NBA game was March 11 in Atlanta, with the Hawks hosting the New York Knicks. It was during that contest that theNBAannouncedsuspensionofallfurther activities because of the coronavirus.

On Carter’s final career shot, he connected from 3-point range. To Carter, the shot meant more than 3 points.

“Making my last shot helped,” he said. “If I hadn’t made that, I would have been itching to get back and at least play one more minute to make one more shot.”

The Hawks were among eight teams not invited back to complete the NBA’s fractured season.