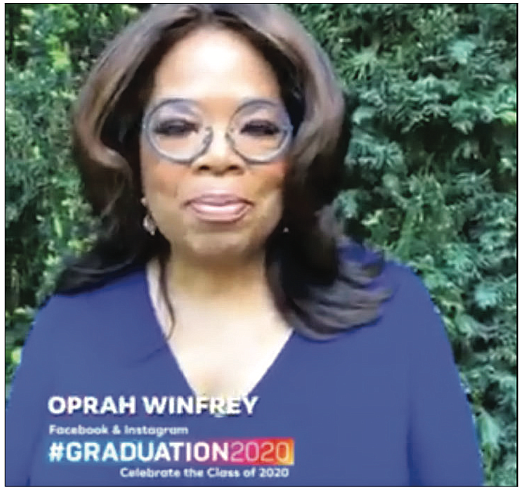 Oprah Winfrey is shown in a screen shot from her recent virtual 2020 commencement address to college graduates.

During a recent virtual address to the class of 2020 college graduates, Oprah Winfrey spoke of the need to provide for those impacted by the coronavirus pandemic.

“What this pandemic has done is made me think about giving differently — how I give and who’s on the receiving end of that, and how do you do that in such a way that sustains people? I’ve ultimately always believed that you teach people to fish. But sometimes people just need fish and a piece of bread,” the media mogul stated. “Sometimes you need some fish, OK? Sometimes you don’t have time to learn to fish. I just need some fish today!”

Ms. Winfrey made sure that there was plenty of “fish” in the places she has called home. Through the Oprah Winfrey Charitable Foundation, the OWN Network boss announced she was donating $12 million to organizations dedicated to helping underserved communities in Chicago, Baltimore, Nashville, Milwaukee and Kosciusko, Miss.

Born in Kosciusko, Ms. Winfrey has lived in each of the cities where she’s donating money.

“This thing is not going away. Even when the virus is gone, the devastation left by people not being able to work for months who were holding on paycheck to paycheck, who have used up their savings — people are going to be in need,” Ms. Winfrey told the Associated Press.

“So, my thing is, look in your own neighborhood, in your own backyard to see how you can serve and where your service is most essential. That is the real essential work, I think, for people of means.”

Of the $12 million, Ms. Winfrey gave $5 million to Live Healthy Chicago, which provides immediate support to seniors and high-risk residents affected by the coronavirus.

She gave $2 million to Nashville Nurtures, a collaboration with Mount Zion Baptist Church and Tennessee State University. Ms. Winfrey graduated from TSU and began her career in Nashville. She later lived in Milwaukee, where she announced a $100,000 gift to SaintA and the Nia Imani Family, which assists those in need of housing and mental health care.

In Baltimore, where she once worked, Ms. Winfrey is donating money to Living Classrooms Foundation and Center for Urban Families. She also said she’s giving $115,000 to the Boys and Girls Club of East Mississippi.

“I want to be able to reach people who have been incarcerated and are coming out of prison,” Ms. Winfrey noted.